Despite an intensified immunisation scheme, children in the country are not fully immunised 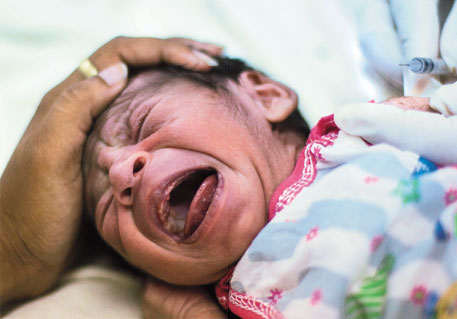 About 15 million doses of vaccines were distributed last year across the country under the government’s intensified Universal Immunisation Programme (UIP). The number is unimpressive considering the huge requirement of vaccination among children and throws light on poor implementation of the promises the Centre had made on intensifying the immunisation programme.

Union Health Minister Ghulam Nabi Azad revealed the data on Tuesday in a written reply to a question in the Rajya Sabha. The government had declared 2012-13 as the year of Intensification of Routine Immunisation.

States conducted “immunisation weeks” in areas that were missed out during immunisation programmes. “During these weeks, 153.87 lakh doses of various UIP vaccines have been administered to missed out children in the country,” the reply reads.

The figure is far too low for the country’s needs, says Jacob Puliyel, head of paediatrics, St Stephens Hospital, Delhi. “A child needs to be protected against six common diseases. As of now, only 50 per cent of the population receives full immunisation. Considering that nearly 25 million children are born in India every year, nearly 12 million are not fully immunised.

Giving 15 million doses will cover only one round of immunisation and therefore, inadequate to immunise the unreached populations,” he says. The National Family Health Survey-3 of 2007 estimated the coverage of immunisation to be 55 per cent, leaving nearly half the children without full immunisation.

The health minister’s reply refers to the Coverage Evaluation Survey released by UNICEF in 2009 and states that only 7.6 per cent of children in the country were not vaccinated. However, analysis of the survey shows this is half the truth. In the survey, the total number of the children who were fully immunised stood at 61 per cent, leaving 39 per cent out of the immune cover.

This means nearly 10 million remain without full immunisation, even going by the survey that the minister quoted. The 7.6 per cent refers to only those who could not take any dose at all. The dropout rates are also very high. For BCG-DPT3 vaccine, the dropout rate was 18 per cent, for BCG-measles it was 15, for DPT1-DPT3 it was 13, for DPT1-measles it was 10, for DPT2-DPT3 it was 9, and for DPT1-[DPT2 it was 5.

“Each dose is partially effective. If you miss the entire course, the child will not be fully immune,” says Puliyel. Thus, the number of children immunised despite an added scheme by the government remains highly inadequate, making a case for better implementation of policies.