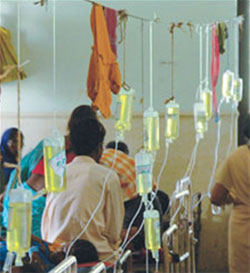 This follows report of a healthy person being forced to undergo surgery for hernia in a nursing home in the district.

The victim was a youth who was in the nursing home to assist his grandfather who was to get his appendix removed.

The youth, Vishnu Rajwar (20), had gone to Sarvodaya Nursing Home as an attendant to get his grandfather Saryu Rai Rajwar (66) appendix removed last week.

Vishnu was rendered unconscious, and on waking up found himself on drip. The nursing staff informed him that his hernia had been operated on. In the next room, his grandfather’s surgery was on.

Bhagwan Pandey, an eye witness, claimed that he saw that the hospital staff forcibly administering anesthesia to Vishnu. “They took the thumb impression of the victim on RSBY declaration letter,” he said.

On receiving information about disturbance in the nursing home, the police took the statements of the victim and his family members. Rajwar senior told police that his grandson is had no problem of hernia. “The problem was with my appendix. The nursing home staff in a bid to earn money through RSBY deliberately operated on Vishnu,” he said in his statement.

Arun Kumar Sinha, civil surgeon at Dhanbad, told Down To Earth that he has received the complaint accusing Sarvodaya Nursing Home of conducting unwanted surgery to benefit from RSBY. “We have started a probe into the matter,” he said.

Sinha alarmed by the incident is also mulling on conducting a review of the surgeries conducted under RSBY in the district.

Suresh Prasad, manager of the nursing home, however, refuted the allegations. “Vishnu complained of pain. On examination we found his hernia elongated,” he said. He justified the surgery as the patient had valid RSBY membership.

Other eyewitnesses have complained that the nursing home has been frequently conducting hernia surgeries in the last few months.