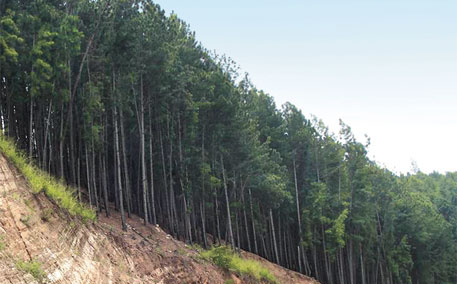 EFFORTS to restore rainforest tree species in Sri Lanka’s Sinharaja Forest Reserve have ultimately borne fruit. It has been found that pine trees are very effective in providing favourable conditions for growth underneath. Till now there have been no ecological processes that could fully restore wet forests.

Over the past 25 years, researchers have been trying to restore native tree species in forest reserves across South Asia. Fast-growing species such as Pinus caribaea, Acacia mangium and Eucalyptus spp were planted in large tracts of abandoned agricultural land and degraded forests in southwest Sri Lanka and in the Western Ghats of India under reforestation programmes in the 1970s and 1980s. Such plantations make the environment more hospitable. They attract birds and bats which help in seed dispersal. They also improve soil fertility by increasing organic matter and by retaining moisture. These factors make the area conducive for native species.

“In southwest Sri Lanka, pine plantations have proven to be very effective at shading fire-dependent grasses and ferns. The pine themselves are fire- and drought-tolerant, making them hardy pioneers that can be planted in open lands that were once agricultural lands but have been abandoned because the soils have eroded or become nutrient poor,” says Mark Ashton, first author of the paper published online on April 8 in Forest Ecology and Management.

Ashton also said he would recommend planting pine plantations in abandoned agricultural areas. The only problem, he says, is that pine can naturalise—it can spread widely if unchecked, even becoming an invasive species that outcompetes natives. Priya Davidar, professor of ecology at Pondicherry University, agrees. “The plantation tree chosen to act as a ‘nurse’ species should not be invasive. I also doubt that regeneration takes place under young plantations; there is probably regeneration only when the plantation trees are old and there is less competition and allelopathy (the process of secretion of chemicals by some species to deter growth of other plants in the vicinity). I would recommend native tree species for nurse trees, rather than an exotic like pine,” she says. However, use of other native species as nurse trees needs further research.

“Native species like Alstonia macrophylla or Peresereanthes falcataria are some candidates [for nurse trees] which we have tried here. Fire protection and soil conservation during early days may be needed [for them]. [Native species such as] Dipterocarpus spp and Michelia champaca can then be planted,” said Nimal Gunatilleke from the University of Peradeniya, Sri Lanka. Gunatilleke was one of the authors of the study.

Other species that were used for plantations (Acacia spp and Eucalyptus spp) also need to be studied. However, there is now an opportunity to better manage the extensive pine plantation across South Asia.