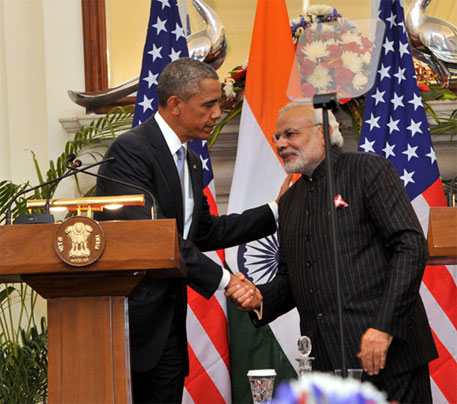 US President Barack Obama and Indian Prime Minister Narendra Modi discussed climate change and clean and renewable energy, among other things, on the day the US president arrived.

But there was no major progress in the climate change front except that both the leaders hoped “for a successful Paris Conference on climate change this year”. The Paris summit scheduled to be held in December 2015 would be a landmark event where a new climate agreement is to be signed by countries. It is to be noted that ever since the US and China clinched a climate deal in November 2014, when US announced 26-28 per cent reduction in its emissions intensity against the 2005 levels (when it emissions peaked) and China announced its peaking year of 2030, there has been a mounting pressure on India to announce its peaking year as well (see Obama-Modi and climate change).  However, India has maintained that it is not going to announce its peaking year anytime soon. The same position was reiterated by Modi in his dialogue with Obama.

On his part, Obama promised to support “India's ambitious role for solar energy”. He said, “important steps were taken today to support clean energy and climate change”. He also stressed on the dire need to “improve the air quality in Indian cities”.