Visiting US president promised finance to speed up India’s green energy mission, but it has to be remembered that the US had complained to WTO twice about India’s solar mission 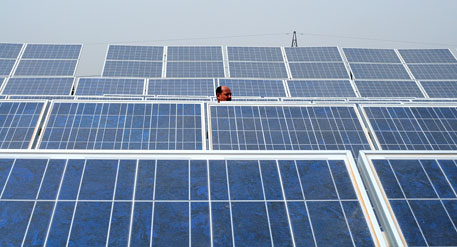 US President Barack Obama’s visit to India has served as a booster for Narendra Modi government’s emphasis on developing renewable energy in India.

In 2014 itself, the year that the National Democratic Alliance government headed by Modi was voted to power, the government had highlighted a plan to provide 24/7 power to every Indian by adding 100 GW of solar power by 2022 and investing more than US $100 billion in the next five years. This has resulted in increase in investment in renewable energy from US $1 billion (Rs 5,895.27 crore) in 2013 to US $7.9 billion (Rs 48,211.69 crores) in 2014, according to Bloomberg New Energy Finance.

The US president has backed Modi’s conviction for developing renewable energy. “India is ready to expand its use of renewable energy as a way to reduce greenhouse gas pollution, a signal that his government is moving towards joining an international deal on global warming.” Modi stated at the joint press statement he made with Obama on Sunday: “for President Obama and me, clean and renewable energy is a personal and national priority.”

Both leaders spoke about the importance of clean energy research, development, manufacturing and deployment to increase energy access. The two sides agreed to work together in solar energy research, improving energy efficiency, develop biofuels and pursuing joint research on smart grid and storage.

“We very much support India’s ambitious goal for solar energy and stand ready to speed this advancement with additional financing,” Obama said during the joint press statement at Hyderabad House.

US has already expressed interest in renewable energy in India. The Export-Import Bank is looking for projects for its memorandum of understanding with the Indian Renewable Energy Development Agency for an amount up to US $1 billion in clean energy. In addition, the US and India will jointly promote super-efficient off-grid appliances that can extend the range of energy services to help meet India’s energy access goals. US-based First Solar Inc. is one of the firms which is considering setting up manufacturing facilities in India.

However, collaboration has not always been so positive. In the past, US has filed complaints twice before the World Trade Organization about India “restricting US companies from doing business in India”. This was prompted by the clause of Domestic Content Requirement (DCR), which mandates that both solar cells and modules used in a power plant must be made in India. In response to the joint agreement between the countries on strengthening partnership in clean and renewable energy efforts, the environmental NGO, Greenpeace, expressed disappointment stating that "the announcement didn't go beyond rhetoric and the usual platitudes.”