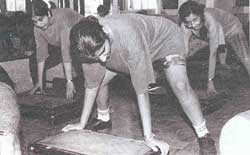 SLIM figures are in vogue. Flab is consid- ered ugly aesthetically and unhealthy scientifically. Recently, researchers at the London-based Hammersmith Hospital developed a state-of-the-art technique for mapping fat deposits in the body through Magnetic Resonance Imaging (MRI) that leaves no place for fat to hide (New Scientist, Vol 146, No 1974).

Weight watchers usually gauge body fat by crude methods like measuring skin fold thickness and ratios of height to weight and of waist to hip. Though these reveal the total amount of flab in the body, nothing is specified about its distribution, especially its deposition around the internal organs, which is crucial to illness related to obesity such as coronary heart disease.

With an MRI scan, 3-dimensional images of slices of body are got by pushing the subject slowly through a magnetic field, pausing at regular intervals of 3 centimetres to pick out fat contours. Then, the composition of a slice of flesh up to 10 millimetres thick is analysed by using brain-imaging software that processes the slices to reveal dazzling white layers of fat on a computer screen.

The technique has confirmed the notion that people with fat concentrated around their stomachs are more prone to heart attacks than people with heavy bottoms. According to Jimmy Bell of the Hammersmith Hospital, obese people have most of their fat deposited around the internal organs. That fat people have about 2.7 times as much fat as thin people but 4 times as much visceral fat, has been established.

The effect of weight loss on obese people has also been revealed. Previous findings that weight loss caused a change in fat distribution with internal deposits shrinking most sharply, has been backed by this technique. Further, the role of fat in the development of our bodies and brains has been invekigated.

A preliminary study has revealed that the composition of adipose tissue in infants alters with age. With unsaturated fats gradually forming the bulk of the fat deposits, the saturated fat content goes down. The reason put forth is that saturated fats being high in energy content, meet the energy requirements of a growing brain. However, Louise Thomas of the Hammersmith team says that the amount of polyunsaturates peaks at about 10 months of a baby's age, before plummeting to adult levels.

But the mRi technique has its limitations. Besides being expensive, it is insensitive to individual fatty acids in the body. However, slicing through fat by scanners is truly revolutionising the study of the effect of body fat on general body health.