Obesity can be counted as disability, says EU Court 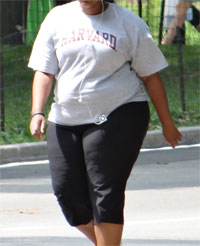 “Obesity may count as disability if it becomes a hindrance in full and effective participation at work,’’ says Europe’s highest court. Disabled workers are protected from discrimination under European Union (EU) law and this ruling has now made it illegal to fire people for being too fat.

The judgement came in the case of Danish childminder, Karsten Kaltoft. The plaintiff pursued the case after his local council sacked him four years ago. The 350-pound child-care worker had alleged that he was fired because of his obesity.

The EU court in its judgement ruled that employers must make accommodations if it is determined that someone’s weight becomes a hindrance in full and effective participation at work. While the court did not categorically term obesity as a disability, it said such severely overweight workers could be called disabled if their condition prevents a “full and effective participation in professional life”. How the obesity developed, whether through overeating, a genetic condition or some other kind of disease, has no bearing on a person's status as disabled, according to the court.

While EU has got obesity in the frame of disability, American Medical Association (AMA), according to a New York Times report, had confronted similar issues at its annual meeting in Chicago last year. It was seen as a biggest policy change on weight and health when AMA recognised obesity as a disease.

According to World Health Organization (WHO), about 20 per cent of European men and 23 per cent of women are obese. (The ruling is of great interest to employers across Europe. The judgement makes no direct link between Body Mass Index (BMI) and obesity, but in any case is an effective explanation that a corpulent labourer whose weight thwarts the execution at work is qualified for handicap assurance. That will mean employers must, on a case by case basis, make reasonable adjustments such as providing larger chairs or special car parking, and protect such employees from verbal harassment.

But legal experts believe that there are wider implications. Providers of goods and services will also have to make reasonable adjustments for their customers. However, Tam Fry, spokesperson of the National Obesity Forum, says the ruling has opened a can of worms for UK employers. "They will be required to make adjustments to their furniture and doors and whatever is needed for very large people. It will also cause friction in the workplace between obese people and other workers," he says in a Daily Mail report.

One in four people in the UK is classified an obese. The Advocate General had earlier referred to the WHO's classification of obesity as being ranked into three classes according to BMI, with Class III or morbid obesity being where an individual has a BMI of higher than 40. In his view, the Advocate General stated that only Class III obesity would likely amount to a disability.

He had also stated that the notion of disability was considered to be "objective", and the fact that it was self-inflicted should not preclude the condition from being protected

Global, regional, and national prevalence of overweight and obesity in children and adults during 1980–2013: a systematic analysis for the Global Burden of Disease Study 2013

Counting the cost of calories