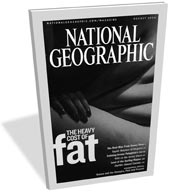 So, the Washington-based Center for Science in the Public Interest has written to the National Geographic Society, publisher of the magazines, complaining about the ads for products like Hostess cupcakes and Kellogg's Smorz cereal in the publication, reports the New York Times.

"It is unconscionable that the Society has chosen to cram National Geographic Kids magazine with advertisements for sugary cereals, candy and snack foods," the letter says. The complaints stem from National Geographic Kids' May issue, which was wrapped in an ad for Arby's, the sandwich shop chain. The wrapper was marked 'advertisement' but resembled the magazine's cover.

Rainer Jenss, publisher of National Geographic Kids, says that the criticism would be carefully considered. "We are going to sit down and go line by line over the points that they made. But parents are the real gatekeepers between Madison Avenue and their children," he says.

According to the Publishers Information Bureau, ad pages in National Geographic Kids grew 7.5 per cent from January through June 2004, compared with the period last year. Jenss says advertising provides financing for the magazine's educational mission. "We do accept advertising from these companies because, from a pure economic standpoint, they're the ones with the advertising budget and marketing dollars to reach kids this way," he says.