Indian children in urban areas are prone to diseases related to obesity even when they have smaller waist circumference as compared to children with similar health condition in developed countries like the US. With obesity among children on the rise in India, lifestyle disorders are becoming a matter of concern among paediatricians. 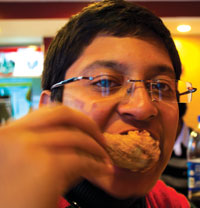 A study published in the April issue of Journal of Paediatrics shows that children with smaller waist circumference were at risk of developing or having metabolic syndrome or MS.

The researchers found cutoff values of 70th waist circumference percentile as an appropriate indicator of MS in this group. The finding was then extrapolated to 10,842 children in five Indian cities (Delhi, Chennai, Kolkata, Pune and Raipur). In this group, the researchers measured height, weight, waist circumference and blood pressure only. The results showed that in the category below 70th waist circumference percentile, only 1.3 per cent children were found to suffer from hypertension. However, the number of hypertensive children were significantly higher above it, amounting to 3.3 per cent of the total children.

“As many as 30 per cent of the children in this group had MS or were at risk of developing it,” says Archana Dayal Arya, paediatrician at Sir Ganga Ram Hospital in Delhi and co-author of the study. "Hypertension is a part of MS. This strengthens our claim that 70th percentile is a good cut off," said Arya. “Children in India have metabolic syndrome at smaller waist circumference because of genetic disposition," she added.

The National Health and Nutrition Examination Survey (NHANES), USA, considers 90th percentile as the cut off for considering metabolic syndrome among children.   Some other agencies put it between 75th percentile to 85th percentile.

"Indians have more body fat for a particular BMI. Abdominal obesity is a much greater a concern [for them] than [their] western counterparts. The study proposes inclusion of waist circumference as a screening criterion for metabolic syndrome. Waist circumference is a good indicator for predicting health risks over BMI wherein centralised obesity is linked," said Anuradha Khadilkar, consultant paediatrician, Jehangir Hospital, Pune, and co-author of the study.

"We need to develop our own standard because different populations have variations of traits. This study is an effort towards that," said Arya (see table).

Junk food menace
Consumption of junk foods along with reduced physical activity could be attributed to increase in abdominal obesity. There is a need to cut down on the junk food consumption and screen time by children, said Khadilkar. Increase in obesity trends in school children have been reported in earlier studies by Khadilkar.

A public interest petition to ban junk food in schools, filed by Delhi-based NGO, Uday Foundation, and directions of the Delhi High Court had prompted the Food Safety and Standards Authority of India (FSSAI) to submit a set of guidelines to limit the availability of junk food in schools.

Eat at your own risk

The proposed guidelines developed by eminent paediatricians, public health specialists and nutritionists clearly establish the link between consumption of junk food and obesity and onset of non-communicable diseases such as hypertension, diabetes and heart disease.

Report: State of the nation’s waistline-obesity in UK

Research: Common variants of FTO are associated with childhood obesity in a cross-sectional study of 3,126 urban Indian children

Research: Dynamics of obesity and chronic health conditions among children and youth