The first historico-legal analysis of forestry regulations in Northeast India 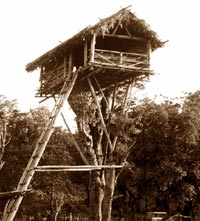 A potpourri of two hundred tribes following hundreds of agricultural and land use systems in an intricate environment of amazing biodiversity -- that's what Northeast India is. How does one manage, legislate and regulate the region with all its social, cultural and ecological complexity, within a political set-up like India? One way to understand this is by looking at the region through thematic windows, such as forestry and its regulation. With more than 70 per cent area of the eight northeast states classified as forests, studying the historico-legal legacy of forestry could certainly give ample insight into its governance. The report, "Community Forestry and Policy in Northeast India: A Historical Legal Analysis", does just that.

Authored by Sanjay Upadhyay and Suparna Jain, the report has been published by Community Forestry International, a us-based non-governmental organisation (ngo). Upadhyay and Jain bring their knowledge of working on forest-related issues with the Enviro-Legal Defence Firm -- a Delhi-based ngo -- to good use. The report promises to be the first step in a collaboration between the two organisations that wishes to guide community forestry in the northeast.

The 50-page report is the first of its kind. This is surprising considering that the region has a history of over-legislation. Also, there have been constant changes in the interpretation of laws, with the Supreme Court (sc) and other judicial bodies passing numerous judgments and orders that impinge heavily upon the legal status of forests and forest utilisation. The ruling that perhaps had the biggest impact in the recent past was the 1996 December sc judgment banning removal of timber from all the northeast states.
The pithy report delves deep into the history of legislating for control over the region's forests, beginning with the first foray of the colonial government wanting to extract timber in the 1850s, and accordingly classifying community-owned forests and making rules.

The authors run through the elaborate documentation that the British regime had left behind to discover nuggets of information such as the leasing out in 1868 of the Jeerang forest of the Khasi and Jaintia Hills, in what's now Meghalaya, on an annual rent of Rs 150 to the government. Such anecdotes and ample data characterise the well-researched report. It stresses that legislations have often been imposed not for the welfare of the people but for the systematic 'exploitation' of rich forests, first by the colonial rulers and then by the post-independent state.

The report also raises several issues for social researchers by pointing out that all the laws that have been formulated to 'control' forests are careful to distinguish between what would be allowed as right, privilege and concessions to the people.
Take the case of states that have areas under Schedule vi of the constitution. The report says that the Assam Forest Regulation, 1891 had the greatest impact on legislation in the scheduled states -- Assam, Mizoram, Meghalaya and Tripura. It influenced legislation even after Meghalaya achieved statehood in 1961 and the autonomous councils started functioning under new laws.

Now, of course, Meghalaya's forests are some of the best defined 'legally'. In fact, the report mentions that Meghalaya is the only state in the country that actually declares what a forest is. The forest classification in Meghalaya exactly follows the state's traditional approach to land classification. But in real terms, this classification has morphed after the sc verdict on timber extraction that has enlarged the scope of the Forest Conservation Act, 1980.

The authors admit that the report excludes the numerous interventions made by the courts, which shall make for a second report. Another comment that the authors make (and in the report, they mostly prefer to stay clear of commenting on information) is that community forestry and the government-promoted joint-forest management movement are completely different concepts in these states. There is plenty to read in the report and between the lines. A must read for anyone who wants to look beyond the beauty of northeast forests and into their social relevance.