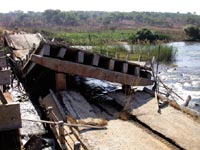 Landmines and damaged transport infrastructure are proving to be the biggest roadblocks to humanitarian aid reaching 1.2 million Angolans. The un Office for the Coordination of Humanitarian Affairs said many non-governmental organisations were forced to suspend their operations or withdraw staff from locations because of inaccessibility to the areas. Angola has been victim to years of independence struggle and civil war. Over the past three decades, more than 20 million landmines have been laid in the fertile Angolan soil. This has drastically blocked rehabilitation and reconstruction efforts. Rain, too, has been playing spoilsport in the provinces of Huambo and Bengeula. Studies by welfare organisations show crops have been destroyed in this area and many people are facing starvation.