At current rate seawater will turn acidic by century end 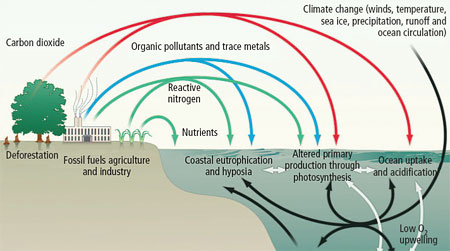 HUMAN activities are affecting the ocean, altering its composition and damaging it bit by bit. Several researchers have documented this, but as isolated cases.

Scott Doney, marine scientist at Woods Hole Oceanographic Institution in USA, recently reviewed researches in the past six years and evaluated the total impact of rising CO2 and pollution levels, agricultural runoff and other human activities on the ocean.

In his article in Science on June 18, Doney noted since the industrial age the ocean has absorbed 25-30 per cent CO2 released by human activities. If this continues, seawater woud turn acidic. The acid-base chemistry, or pH, of seawater is changing 30 to 100 times faster in recent years. It has decreased 0.1 unit in the past two decades. A further dip of 0.2-0.3 units by the end of the century would make the water highly acidic, Doney stated in the article. This would affect the marine ecosystem.

For instance, calcium carbonate saturation decreases in acidic seawater. As a result, the calcium carbonate present in the coral and seashells would be eroded and they would not be able to build their skeleton or shells. Doney calls for a detailed documentation of compounds in the ocean and a coordinated monitoring plan of the marine ecosystem.

The overall impact of ocean acidification on the food web would be profound, said S W A Naqvi of the National Institute of Oceanography, Goa. The study is timely in the context of changes occurring in our own country’s coastal environment, he added.