Marine life is a source for future medicines 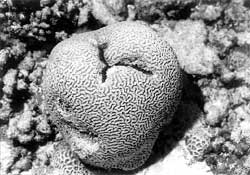 an anti-diabetic substance is currently being tested in India for accelerated stability and shelf life studies. The news is that the substance is being synthesised from a source not found on land but under water. It's derived from a marine organism. The compound has been also found to be effective against diarrhoea. The Central Drug Research Institute (cdri) has been granted permission to test the drugs in monkeys and the final drug might be available for marketing sometime during the next year.

And this is not the only drug that may emerge from studying marine life forms. Scientists are trying to find new drugs from the oceans. Delicate marine organisms rely on toxins to protect themselves from predators and researchers feel that these organisms will yield chemicals that will be useful in curing numerous diseases. "Given the great biodiverstiy of invertebrates and microbes in the marine ecosystems, there is a potential to discover compounds that are effective against a wide range of diseases", says Russell Hill, associate professor at the Center of Marine Biotechnology, University of Maryland Biotechnology Institute, usa .

Finding new sources for the medicines has become very important considering that pathogens are developing resistance against the available drugs such as antibiotics. Also, trying to find a new drug from the terrestrial sources has become unproductive and expensive. The scientists also hope that the oceans will yield cure for diseases for which effective medicines are not available.

In India, the 'Drugs from Sea' programme was initiated in 1991 by the department of ocean development for exploring the potential of marine organisms as source of medicines. Ten laboratories around the country are involved in the research today. Samples collected from different parts of the country are evaluated for their medicinal value by subjecting aqueous extracts to around 120 different tests in the labs at cdri . Material collected from various areas by agencies like the Central Institute of Fisheries Education, Mumbai and National Institute of Oceanography, Goa, is sent to cdri . "Organisms ranging from sponges, snails, fungi, algae, mangroves and sea grass can produce active chemicals which can be used as drugs," says Ram Raghubir, deputy director, division of pharmacology, cdri . "These organisms produce chemicals mainly to protect themselves especially when they are not able to flee the predator," he says.

The preliminary screening at cdri has short listed six organisms for treatment of diseases including diabetes, diarrhoea, high cholesterol, hypertension and fungal diseases. Three of these drugs are in advanced stages of development. "We hope to find out drugs to cure diseases such as impaired memory, wound healing, problems related to aging in the near future" says Raghubir. Three patents have been filed and are in the review stage, he informs.