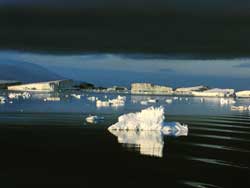 oceans have cooled substantially during some of the warmest years in recent times, claims a study. During the years 2003 and 2005, which saw the highest global average surface temperatures in more than a century, the top 750 metres of the oceans lost around one-fifth of the heat accumulated over the past 50 years, says the paper that will appear in a forthcoming issue of Geophysical Research Letters.

Oceans cover two-thirds of Earth's surface and have far more heat-storing capacity than air or land. Overall, they have warmed in recent decades. Between 1955 and 1998, for example, all of the world's oceans, down to a depth of 3,000 metres, warmed by 0.037 c.

But that warming has not proceeded steadily. For instance, between 1980 and 1983, a drop in ocean temperatures that was almost twice as pronounced as the current cooling, was reported. However, it was not supported by scientific data.

The present study is based on data from several sources, including that from argo, a global array of 2,500 floats that transmit data via satellites. When argo data were removed from the analysis, the cooling was significantly less pronounced, and the error bars became larger, say the authors of the report, led by John Lyman of the National Oceanic and Atmospheric Administration, usa.

According to Gavin Schmidt, a climate modeller at nasa's Goddard Institute for Space Studies, usa, a short-term cooling blip can't say much about the climate system in general. But the latest study suggests, he says, that coupled ocean-climate models fail to adequately capture intermittent fluctuations in ocean temperature. In theory, the recent cooling should have led to a two-millimetre drop in sea level due to the thermal contraction of water, which becomes denser at lower temperatures. But satellites have measured a steady rise in sea level between 1993 and 2005 -- the period covered by the study. For the observations to be reconciled, melting ice sheets in Antarctica and Greenland must be contributing far more to sea level rise than previously suspected, says Schmidt.