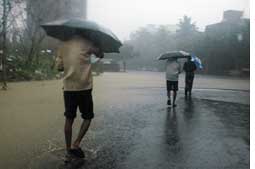 the Indian Meteorological Department (imd) has predicted a normal monsoon for this year. But such predictions are known to fail often. A recent study says predictions fail because most models do not take into account temperatures in the Atlantic Ocean. imds prediction models, among other things, focuses on the El Nio, the warming cyclic phenomenon of the Pacific Ocean, an important factor to determine monsoon in India. Typically, when El Nio occurs in the Pacific Ocean, it is predicted that India will not have a normal monsoon.

The temperature of the south-equatorial Atlantic Ocean offers some clues, says a team of researchers from Italy, the usa and the uk who found that the behaviour of the rains for the period 1950-1999 could be reproduced by a general circulation model only if the (temperatures) effect of the south equatorial Atlantic Ocean surface was taken into account . It could also be the reason for the weakening of the link between El Nio and the monsoons seen in the past few decades. For reasons not fully understood, the tropical Atlantic Ocean was slightly cooler than normal most of the summers over those two decades (80s and 90s) and helped in mitigating the decrease in rainfall every time El Nio formed in the Pacific. In the 60s and 70s the surface waters in the Atlantic ocean were warmer than usual and contributed to amplify the El Nio-monsoon relation, the lead author said. The weakening has generally been attributed to a variety of factors, including climate change.

Using this information effectively requires a model to predict if the summer sea surface temperatures in the Atlantic will be colder or warmer than usual, the researchers said in the study published in the February 27 issue of Geophysical Research Letter.