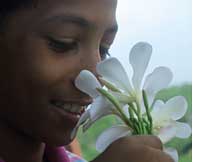 THE fragrance of almonds is closer to that of roses than of bananas. Scientists from Weizmann Institute, Israel, have, for the first time ever, mapped odours and determined the distance between them. This helped them distinguish one odour from another.

"In olfaction you do not know the relation between two odours. The number of carbon atoms in a molecule are an important dimension to measure this. I decided to take a large group of molecule descriptors and use them to create a map in which I could compute distance between odourants," Rafi Haddid, one of the authors, told Down To Earth.

To create their map, the scientists started with 250 odourants and generated, for each, a list of around 1,600 chemical characteristics. From this, the researchers created a multi-dimensional map of odours that revealed the distance between one odour molecule and another. To see if the brain recognizes the map, the way it recognizes musical scales, the researchers re-examined previous studies that measured the neural response patterns to odours in lab animals. They found that across all species, the closer any two odours were on the map, the more similar were the neural patterns.

These findings which appeared recently in Nature Methods, lend support to the theory that universal laws govern the organization of smells. It may help scientists to unravel the basic laws underlying our sense of smell and enable odours to be digitized and transferred.