Of highs and lows 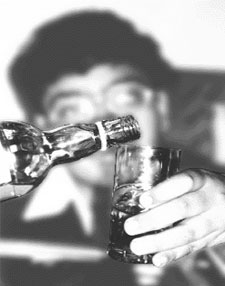 some people get drunk after consuming a small quantity of alcohol, whereas others stay calm. A team of researchers led by Hiroaki Niki at the riken Brain Science Institute, Wako city, Japan, says the variation could be linked to an enzyme that modifies brain receptors for alcohol. According to them, the enzyme called Fyn tyrosine kinase may play a crucial role in such cases (Science , Vol 278, No 5338).

The researchers injected alcohol in two groups of mice, one group with the gene for Fyn kinase and other without. They found that mice without the kinase stay tipsy longer than normal mice. It may be because the enzyme normally counteracts alcohol's depressive effects on neurones, causing acute tolerance.

After being injected with ethanol, the mice were placed on their backs in a v -shaped trough and timed how long it took them to stand upright. The team reports that those mice which were not given alcohol stood up immediately, whereas normal mice took between three to forty minutes. However, the mice which lacked Fyn kinase gene, took nearly double the time as compared to those with a functioning Fyn kinase gene.

To know how the gene affects neuronal responses to alcohol, the researchers studied the activity of the enzyme in both the groups of the mice, before and after alcohol exposure. They already knew that a biochemical effect of the Fyn kinase is to add phosphates to a component of the nmda receptor. The receptor is a multiprotein complex present in the nerve cell membrane that receives a specific chemical signal from adjacent cells.

The Niki group observed that the intake of alcohol by those mice which did not have Fyn kinase, could not change nmda receptor phosphorylation in their brains. The researchers thought that the phosphorylation might be linked to the nuerone's recovery from suppression by the alcohol. When the electrical activity of nerve cells was studied, it was found that alcohol made the cells less responsive.

In normal mice, the effect lessened because the nmda component became phosphorylated. But after five minutes, the cells became as responsive as before even after continued exposure to ethanol. However, the mice with-out Fyn kinase were half as responsive as normal even after 15 minutes.