Of sunshine and oasis 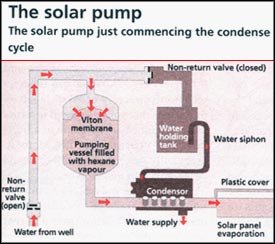 for millions of people in the Third World, the shortage of water -- and the daily grind of carrying it from the source to the point of use -- could soon be a thing of the past. It is back-breaking, time-consuming and extremely wasteful.

An engineering company in the uk has come up with a simple and cheap solution -- a small, solar-powered pump, described by its inventor as "the epitome of minimalist engineering".

Explaining the principle behind the solar pump, David Nicholas, head of marketing at Solar Gray Pumps, Hampshire, uk, says, "We use the heat of the sun's rays to generate the physical change which occurs in the pump's solar panel."

The two sq m-long panel contains a fluid -- hexane -- which is alternately heated past its boiling point by the sun to convert it into gas and then cooled by the water being pumped, so that it becomes a liquid. Hexane as a gas has a greater volume than as a liquid and this feature helps in pumping water out of a borehole, well or river.

The solar panel which captures the sun's rays can provide sufficient energy to pump upto 4,546 litres (lt) of water a day from a depth of upto eight m under average tropical conditions. The pump has recently undergone field trials in Jamaica after extensive tests on it were conducted in the laboratory using artificial heat.

The pump is much cheaper to run than conventional systems which are based on fossil-fuel-run engines. Due to the absence of an engine, there is little maintenance. According to the company, the pump would cost around us $2,250. It is ideal for providing drinking water to remote areas.

"In what is called the sunshine belt -- between the Tropics of Cancer or Capricorn -- which consists predominantly of lesser developed countries, we can see an enormous potential for the solar pump," says Nicholas.

The millions of hand-operated deep well water pumps in the developing countries require a lengthy system of connecting rods between the surface and the bottom of the well. These have to be disconnected and reconnected every time the pump needs reservicing, which is laborious and often leads to breakages. In contrast, Nicholas opines that the new solar pump could eliminate these problems and revolutionise pumping systems through- out the world.

The pump is a result of research started three years ago which was motivated by a defined need to supply 9,092 lt of water to 25 people, their dependents and livestock. Nicholas says they are close to achieving their target. "We are using the simplest of technologies -- nothing except sunlight. What makes this whole business remarkable is the fact that it does not demand fuel for its operation and is maintenance-free," adds Nicholas.