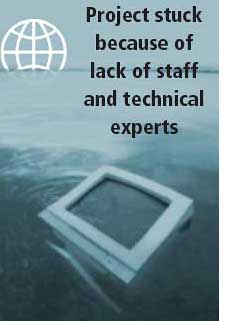 Looks like it will take a long time to get hydrology data in the country, despite millions of dollars being spent on developing a hydrological information system. This is being done through a World Bank-funded Hydrology Project, which involves several central, state and private agencies.

The first phase of the project started in 1995, concluded in 2003 and us $142 million was spent on it. The second phase, involving 13 states and eight central agencies, started in 2004 and is expected to finish in 2012. The World Bank has given a loan of about us $135 million for the second phase, of which about us $17 million has been spent.

Dissatisfied with the performance in the first phase, the World Bank in a report said "...the use of hydrological information system data remains opportunistic". A lot of the mistakes of the first phase are expected to be rectified in the second, and the Union Ministry of Water Resources (mowr) has been made the nodal agency now. The bank had even issued a "strict" deadline for the Centre to make the hydrological information system operational by August 15, 2008.


Down To Earth (dte) found much confusion on the ground. Orissa, Andhra Pradesh and Karnataka were not aware of any deadline. Maharashtra officials believed the deadline was for the submission of the annual audit report, which, officials said, had been completed a month before the deadline. That apart, most states haven't started the process of collecting data. A few others haven't even carried out the mandatory awareness and training programmes or monitored water quality yet.

The objectives of the second phase of the project include appointing a consultant to undertake creation of hydrological design aids, water quality studies, planning decision support system and purpose-driven studies. But that is a grey area. Blaming the states, an mowr official said it is too early to talk about the project. "We are yet to appoint consultants. Besides, we did not get any satisfactory response about the progress of the project from any of the state governments," said Narendra Kumar, commissioner of the ministry's project coordination secretariat. The ministry may warn states that non-performers will be ousted from the project, said sources.


Technical gaps and not enough personnel are the primary roadblocks, say officials. During the first phase, a software called Ground Water Estimation Management System (gems) was used. Tata Consultancy Services (tcs) developed the software, for which Rs 8.5 crore was invested. Another software, wisdom, which the Central Water Commission introduced for surface water database management, is in use but not without difficulties. The software, officials said, has "inbuilt problems where compiling, collating and retrieving data is difficult". Use of gems stopped because people were not trained to use or maintain it. Sources in mowr said the technical problem could not be resolved because technical experts were transferred.

Asok Kumar Jain, in charge of the project in Andhra Pradesh, said, "It is cumbersome to operate the software. gems 3.01 version is installed in xp operating system, through which neither maps nor reports can be generated. " Jain said Andhra Pradesh did not have any maintenance contract with the company. Maharashtra and Kerala also faced a similar situation.

Defending non-renewal of the contract, Sunil Kumar, officer in charge of the project at the Central Groundwater Board, said, "At the time of conceptualization of the first phase, a five-year contract was made for gems --one year for development and four years for operation and maintenance--to be done by the board. Even after that we operated and maintained the software till 2007 at our own cost. Now it should be the responsibility of the state concerned to maintain it."

Staff crunch, the other problem, is not restricted to the states. Explaining the issue, R C Trivedi, additional director, Central Pollution Control Board, said: "Due to severe staff shortage, we could conduct only nine training programmes in the past two years. Progress is slow and not satisfactory." Another official said the board does not want to be a part of the project because of staff shortage and excessive workload.


The bank insisted that hydrological information system is crucial for sound planning of development projects in the country. "Unreliable and inadequate hydrological data have resulted in less optimal benefits and sometimes unsafe control structures. Take the case of the Nathpa Jhakri hydropower project in Himachal Pradesh. It had to be stopped because of a serious silt problem," said a bank official.

But wait, cautioned experts, the first phase is long over and there still hangs a big question mark over access to data. Nashik-based water expert K J Joy questioned the authenticity of data. "How can one rely on the data gathered during the first and second phases of the project, which are in a mess already?" he asks.