Offence is the best defence 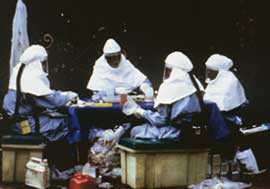 the Ebola virus is deadly -- it causes fever and severe internal bleeding in humans and primates and kills 50-90 per cent of the infected. There is no treatment against Ebola infection, though vaccines are being developed. Now, us researchers suggest a different strategy -- instead of trying to bolster the host immune response, target the virus itself.

Though Ebola infection is rare, it is important to find ways of tackling it, as the viral reservoir is not known. Also, the possibility of the virus being used for bio-terrorism cannot be ruled out.

The therapy, developed by a team led by Sina Bavari of the us Army Medical Research Institute of Infectious Diseases, uses a small sequence of genetic material, rna, that prevents replication of the virus. This gives the immune system more time to respond and fight infection. The findings were published in the January issue of the online journal PLoS Pathogens.

The group first tested the rna strands in vitro in infected cells. The strands were then tested in vivo in mice treated both before and after infection. Both strategies were found to be effective in controlling virus multiplication. The group also designed a small proof-of-concept trial in nonhuman primates. Monkeys were treated with the drug singly and in combination. The strands protected 75 per cent of monkeys from lethal infection. The results also showed that the strands worked better in combination.

The ability of virus-specific rna strands to inhibit viral growth by interfering with translation of viral rnas was first demonstrated in 1978. The new study has far-reaching implications for treating highly lethal haemorrhagic fever viruses, and for many other acute viral diseases including sars, influenza and dengue. "The work described here may contribute to development of designer, 'druggable' countermeasures for filoviruses and other microbial pathogens," say the authors.