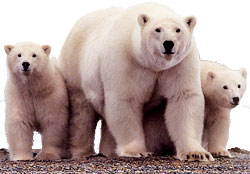 The us government has once again missed its deadline to add the polar bear to the list of endangered species. The us Fish and Wildlife Service was due to take a decision in this regard by February 8 this year.

The delay has fuelled doubts about the government's intention to conserve the polar bear and its habitat in the Arctic region, which is shrinking due to global warming.

Just two days before the deadline, the government opened nearly 12 million hectares of pristine Chukchi Sea, off the Alaskan coast, for oil and gas exploration activities. The us Department of the Interior--responsible for managing and conserving federally owned land--announced a us $2.6-billion bid to sell oil and gas exploration rights in Chukchi Sea. And the winning bids include a record-breaking us $105.3-million offer by the multinational energy giant, Shell.

Alaska is home to a substantial population of polar bear and Chukchi Sea is one of their prime habitats in the entire North America.

The us Fish and Wildlife Service denies any link between the deferment of the deadline and granting of leases to oil companies in the polar bear territories. The delayed decision is because the government needs more time to analyze all scientific data and vet public comments before it decides to list the polar bear under the Endangered Species Act of 1973, says the department.

Polar bear are already protected under the Marine Mammal Protection Act of 1972. The law protects the animal from traffickers and poachers.

But conservationists say the threat is more because of loss of sea ice. "For the polar bear to survive global warming, we need to protect the remote and fragile places where they live, not auction them off to oil companies," says Brendan Cummings of the Center for Biological Diversity (cbd), a us- based conservation group, which filed the petition with the us Fish and Wildlife Service in February 2005, calling on the government to list the polar bear under the Endangered Species Act. The act is one of the world's most successful laws designed to protect critically imperiled species from extinction. cbd's petition was later joined by the Natural Resources Defense Council and the Greenpeace. The department, however, did not act on the petition until the groups filed a complaint in a us district court in December 2005. It published its intent to add the polar bear to the endangered species list in the Federal Register on January 9, 2007, and asked the us Geological Survey (usgs) to gather new scientific data on polar bear and their sea ice habitats. usgs submitted its report in September 2007 and said the polar bear population would decline by two-thirds by 2050 because of shrinking sea ice. The report also stated that the Chukchi Sea is under the "greatest threat" because sea ice in the region is receding at a much faster rate. But the government is yet to reach at a decision.

The reason the government is dragging its feet on the issue, say conservationists, is that listing polar bear as endangered would oblige federal agencies to ensure that any action they authorize, fund or carry out will not jeopardize the animals' continued existence or affect their habitat. This will limit all development, particularly oil and gas exploration activities, in the area.

The battle has now reached the us Senate. Senator John Kerry of Massachusetts recently introduced legislation prohibiting new drilling off the Alaskan coast until the polar bear is listed under the act and the area has been designated a 'critical habitat'. "Before the government sells more of their habitat to big corporates, we need to know the impact of drilling on the region," said Kerry.

The petitioners are again planning to approach the court to force the Bush administration to come out with a decision soon. Inaction would mean that the tough decision will have to wait till the next president is elected, thus inordinately delaying its impact.