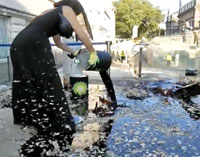 It was a summer party celebrating BP’s 20-year sponsorship of London’s Tate Museum, and protestors used it to call attention to its handling of the oil spill in the Gulf of Mexico.

On June 28, protesters emptied BP-labelled cans containing a slick material in front of the party’s entrance and covered the spillage with bird feathers.

Other protesters poured cans of the same material in the museum’s main hall, while a separate group dressed in black picketed the event. BP, which spends more than US $1.5 million a year to sponsor art institutions, including the Tate Britain, the British Museum, the Royal Opera House and the National Portrait Gallery, said it would continue the sponsorships.

“We are grateful to BP for its long-term commitment,” said the galleries in a joint statement.