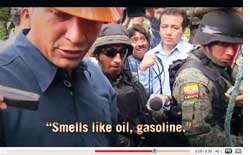 In the late 1960s American filmmaker Joe Berlinger saw villagers in northern Ecuador eating canned tuna because the fish in their rivers were contaminated. The product of that realization is the new documentary Crude, the latest weapon in an escalating public relations war taking place alongside the equally contentious legal war over whether Chevron is responsible for the 916 waste pits of crude oil that dot the Amazonian region of northern Ecuador.

The film shows how people and oil giants respond to the oil pollution. People describe how they built houses in clearings they later discovered were oil pits covered with dirt. A plaintiffs lawyer, Pablo Fajardo, says that Petro-Ecuador, the state-owned petroleum company, is not innocent and might be taken to court.

Recordings from bugging devices implanted in watches and pens reveal a bribery scheme involving the judge handling the case, the sister of former president Rafael Correa and an Ecuadorian hoping to secure clean-up contracts for a US businessman.