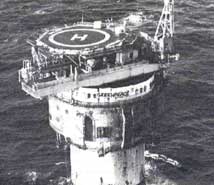 AS the disused Brent Spar oil platform makes its slow journey towards its disposal site in the Atlantic, irate protests to bring it to a stop have reached a crescendo, particularly in Germany, Denmark, Sweden and the Netherlands, neighbouring the North Sea.

Facing the barrage are the United Kingdom and the Royal Dutch Shell, the Anglo-Dutch oil giant. The basic issues underlying these protests are the ethics and safety of using the seas as burial grounds for redundant technology, like dead oil rig platforms.

It all began with the British government's decision to dump the used Brent Spar oil rig, manufactured by Shell, in the Atlantic. Accordingly, it was fitted with hull-bursting explosives in preparation for its disposal. Tugs then began to pull at the platform, dragging it inch by inch towards its burial at a precipitous 2,000 metre deep-sea disposal site some 150 miles west of the Hebrides off the Scottish coast. The rig is to be consigned to its grave in the 3rd week of June.

Earth's seas are capacious, but the fear is that once they are thrown open for waste disposal, the deluge can't be stopped. The decision to sink the rig sparked off protests from most European countries who see the dumping as a precedent for the disposal of 220 other platforms dotting the North Sea. At the recent North Sea Protection Conference in Esbjerg, Denmark, Swedish environment minister Anna Lindh led the voices of dissent and accused Britain of "greed and lack of foresight" in allowing the dumping. Denmark-based Ritt Bjerregaard, the European Commisssion's environment commissioner, maintained that "the dumping of the Brent Spar is not acceptable. The dumping of all old oil installations must be banned."

Britain's environment secretary, John Gummer, seemed unmoved by the criticism. Dismissing the objections, he said that "the Danes and other Continental countries are just trying to divert political attention from their own shortcomings," adding that under no circumstance would Britain be "bullied" into changing its mind on Brent Spar.

Foremost among the critics is the international environmental group Greenpeace, which barged in with 2 ships to help its activists throw punch a hole in the dumping process. Said a Greenpeace statement, "We will do everything we possibly can to win this battle. We are still determined to prevent the dumping." In fact, 2 Greenpeace activists landed on Brent Spar by helicopter and threatened to go down with the rig.

For Shell, this entire process is akin to being keel-hauled. It could turn out to be an error the oil giant can ill afford, even if it is strictly according to the letter of the law. Defending the company, Shell officials insisted that Brent Spar was a "unique" structure whose disposal demanded a "unique solution". They also said that their decision was taken only after vetting many plans and suggestions, and that it was safer to dispose Brent Spar at sea than have it decommissioned on land.

The company says that the decision, moreover, was in keeping with the guidelines of the International Maritime Organization, the United Nations agency which oversees sea pollution. All this wheedling is not cutting much ice with environmentalists, who view the dumping as a major environment risk: the rig is loaded with 100 tonnes of contaminated sludge -- 10 per cent of which is heavy oil residue -- as well as 30 tonnes of low-level radioactive material in its pipelines. Shell believes that these pollutants will disperse in the sea water with less harm done than hauling the rig ashore and dismantling it.

As waves of protest, especially in environment conscious Germany, gain ground, Shell finds its products banned and its petrol stations the targets of protesters getting angrier by the day. Already, calls by Greenpeace activists to boycott Shell products in Europe have met with widespread approval. Greenpeace started a leaflet campaign in Switzerland and put inserts in the national UK papers asking readers to send the oil company missives stating their unequivocal opposition to the dumping, along with a threat to spurn Shell products.

In Germany, Shell stations were attacked by protesters who went on a rampage tearing apart petrol pumps and damaging windows. A station in Hamburg was set alight, and sales immediately sagged by 30 per cent. Environmental groups in Britain are urging motorists to use the products of companies other than Shell. Said Madeleine Cobbing of Greenpeace, Britain, "Motorists should choose other petrol stations while Shell pursues its dumping policy."

With German chancellor Helmut Kohl leaping into the fray, the protest movement received a fillip. For the British Broadcasting Corporation said that the environment on land and the safety of people in the UK will not be imperled.

Even Britain's obstinacy, seen by the EU's environmentalists as foolishly firm, and with Norway and Shell sheltering in its shadow, could not arouse world's green militant fringe. The battle has been won temporarily, but thte issues have yet to be resolved.