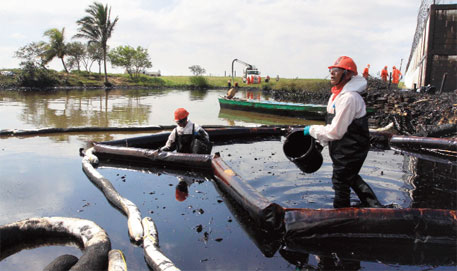 CLEANING waters of oil and hydrocarbons is a difficult task. Currently, commercial emulsifiers are used for the purpose. But they are costly and also do not clean the water completely. Instead they form clumps.

Now Indian researchers have shown the potential of a bacterium found in wastewaters to clean it.

The team from the Central Salt and Marine Chemicals Research Institute in Gujarat found that Cronobacter sakazakii secretes a biosurfactant which successfully binds with oils and hydrocarbons in water to form emulsion, a colloid solution.

To isolate the biosurfactant-producing bacteria, the researchers collected samples from soil, effluent, sludge and oil industry wastewaters from Jhagadia and Gondal, two industrial hubs in Gujarat. They isolated 43 types of colony-forming bacteria from the samples. Then they narrowed their search to six types of bacteria depending on their ability to destroy cells through biosurfactant production.

So can the biosurfactant from the bacterium be used to deal with disasters like Deepwater Horizon (DWH) oil spill, the biggest environmental disaster in US history where nearly 800 million litres of crude oil spilled into the sea? “It is too early to predict the biosurfactant’s use to clear DWH oil spill,” says Kalpana Mody who led the research team. “We have done experiments only in the lab. The results need to be validated.”