Construction work going on around the avian habitat without any approval 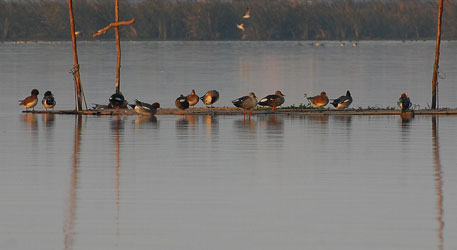 More than 50 developers have undertaken construction work within 10 km radius of the Okhla bird sanctuary without obtaining any clearance from the concerned authorities. The sanctuary is home to more than 300 bird species, including the painted stork, darter and migratory birds like northern shoveller and gadwall.

The sanctuary lies primarily in Gautam Budh Nagar district of Uttar Pradesh, with some parts of it on the eastern bank of the river Yamuna in Delhi. It was notified as a bird sanctuary under the Wildlife Protection Act by the Uttar Pradesh government in 1990. “The sanctuary is a haven for waterbirds,” says biologist Abdul Jamil Urfi. “The wintering ducks at Okhla are dependent upon the surrounding area, especially the grassy patches, and marshes around the barrage for feeding. As more and more areas around the barrage are built up, these habitats are disappearing and so it is important to take stock of the land development,” he adds. As per a Supreme Court order, it is essential to seek the recommendations of the standing committee of the National Board of Wild Life (NBWL) if any project requiring environmental clearance is located within the eco-sensitive zone around a wildlife sanctuary or a national park. In the absence of such delineation, recommendations are required if the project lies within a distance of 10 km from the sanctuary’s boundary.

But the construction work around the Okhla bird sanctuary was started without obtaining necessary clearance from NBWL. Gautam Budh Nagar divisional forest officer B Prabhakar says, “Only two companies have submitted applications, seeking permission for development in the area.” He adds: “All we can do is make the developers aware about the regulatory requirements, and we have already issued notices seeking response.” Further action is awaited. Concerns were also expressed by Prabhakar regarding similar developmental threats on the Delhi side of the sanctuary. But A K Shukla, chief conservator of forests and chief wildlife warden of Delhi forest department reported that so far they have not received any application from any developers.

The construction work close to the sanctuary adds additional threat to the wildlife that is already at a risk of electromagnetic radiation hazards from nearby cellular phone towers. The Gautam Budh Nagar forest department had earlier made it mandatory to obtain clearance before setting up mobile towers within one kilometre radius of the sanctuary, and has asked Noida Authority to refrain from granting any fresh approval.