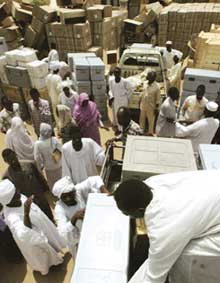 As southern Sudan emerges from decades of civil war, the country is now experiencing a deluge of forgotten diseases that were believed to have been under control. who blames it on the country's health system, which has broken down during the war. The diseases that are resurfacing now include leprosy, elephantiasis, kala azar, river blindness, cholera, sleeping sickness, guinea worm and Buruli ulcer. The largest cases of neglected diseases are being discovered in previously isolated communities. The increased movement of non-immune people to an endemic area for a certain disease also increases the risk of further transmission. But in the absence of a proper health system, resources and access to remote populations, the country is not ready to tackle this new threat in the postwar period.