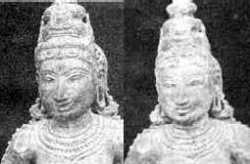 All things old carry time's signatures. Just as human faces develop wrinkles and trees annular rings, metallic objets d'art acquire a bluish green veneer called the patina. Till recently, this time-daubed smear, much valued by connoisseurs and historians, was lost in the restoration process. Now, thanks to a new chemical developed by scientists at the Lucknow-based National Research Laboratory for Conservation of Cultural Property (NRLCCP), that ancient look can be preserved.

Artefacts imprisoned in earth for centuries often get draped with a layer of calcium and magnesium salts. In the old days, stripping off these unwanted add-ons was arduous and time-consuming. But far more annoying for the curators, these primitive methods destroyed the time-worn looks of the art pieces.

In 1940, M Farnsworth, a British chemist, came up with a new cleaning agent called Calgon to get rid of the unwanted salts of calcium and magnesium eating into copper and bronze sculptures.However, despite Calgon's instant popularity, it left much to be desired -- that bluish-green lustre, indicative of the "antiquated" appearance, was also lost.

With this background in mind, NRLCCP scientists V C Sharma and B V Kharbade started looking for a detergent that could remove the accretions without damaging the patina. They found one such cleaning agent in sodium tripolyphosphate (STPP), for many years a common ingredient in detergents. In fact, the chemical helped the patina stand out, much to the delight of the curators of the Thanjavur Art Gallery, who had given NRLCCP scientists a variety of artefacts to remove impurities which had become too stubborn for Calgon.

Says Sharma, "The treatment of copper and bronze artefacts with STPP resulted in the removal of all white accretions without affecting the patina and the remarkable sculptural detail on the surface was safely revealed just as it had been designed by some unknown sculptor ages ago and preserved in the patina."