Old wine in a new bottle 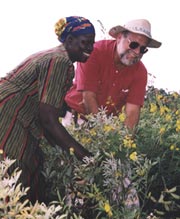 pedro sanchez, head of Nairobi-based International Centre for Research in Agroforestry (icraf), was recently awarded the World Food Prize for his research into low-technology methods for improving soil fertility. His research reveals that by using leguminous trees rather than plants, soil fertility can be improved cost-effectively.

Crop rotation using legumes such as clover and alfalfa is standard practice in many parts of the world for increasing soil fertility. Roots of legumes harbour bacteria that are able to extract atmospheric nitrogen -- an important requirement for the formation of soil organic matter. The nitrogen, which the legumes store as soluble compounds, is released when the plants are uprooted and their roots start decomposing.

Because of this, legume plants are alternately grown with primary crops. But, Sanchez says that growing leguminous trees bears more fruit. The trees, unlike the plants, can be planted simultaneously with crops and therefore they have their effect before the following crop season. Moreover, because the trees initially grow slowly, there is little competition between them and the crops.

Sanchez and his colleagues tested 15 different species of leguminous trees and found that the best of them added between 100 to 200 kgs of nitrogen to every hectare of soil per year. A further benefit of the system came in the form of weed control. Crops are often damaged by witchweed, a widespread crop parasite that usually germinates after a cereal crop is planted. However, secretions from the trees' roots stimulate the germination of the witchweed seeds before crop planting. With nothing to feed on, the witchweeds die, leaving the field clear for the next sowing season.