The US pollution laws surpass all limits of hypocrisy 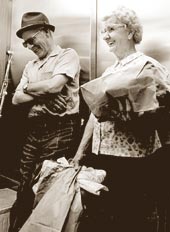 in all grandeur, the Bush administration has proclaimed that it will discontinue the practice of valuing young lives more than the old ones for computing the cost and benefits of pollution controls. The practice, nicknamed 'senior discount', underrates the lives of people who are 65 years and above by 37 per cent. Federal agencies were authorised to use the method in 1996 under the Clinton Administration. Christie Whitman, administrator of the Environmental Protection Agency (epa), said the practice had never been used to 'actually' formulate a policy. It 'merely' provided an extra selling point for some pollution control proposals.

epa officials heard mounting criticism of the discount during their recent 'six-city listening tour' organised to know the environmental concerns of the senior citizens. Al McGratland, chief economist of epa, said the discount was dropped because it was "objectionable at some fundamental level". While announcing the end of the practice, Whitman said: "We are not in the business of putting a price tag on life -- young or old."

This claim however may not hold water. The White House is now expecting epa to evolve a way to estimate cost and benefits of years of life gained or lost as a result of a policy change. The old method, in contrast, only looked at the estimated number of lives saved, regardless of how long a person lived.

The decision is bound to make the country's health policy more unfavourable. "Both the systems (the new and old) are a different manifestation of the same objectionable policy of devaluing the lives of Americans in order to reduce the benefits of the health protection system, which is already in a sad state," avers John Walke, an attorney with the Natural Resources Defense Council, usa.