Reason to save India's wolves 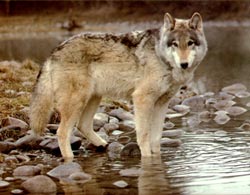 genetic analysis of the Indian wolves has revealed an astounding fact -- the creatures represent the oldest wolf lineage of the world. The investigation, conducted by researchers from Hyderabad-based Centre for Cellular and Molecular Biology (ccmb), adds to the biological significance of the endangered Indian wolf population. It even underpins calls for urgently implementing conservation projects.

Two different subspecies of the wolf Canis lupus are found in India -- C lupus chanco and C lupus pallipes. Barely 350 individuals of the former, popularly known as the Himalayan wolf, are found, that too only in the upper Himalayan region. C lupus pallipes, called the Indian grey wolf, are slightly more -- 1,500. Because of the ever-dwindling population of the wild animals, ccmb researchers began molecular characterisation studies in 1998. They wanted to understand the animals' genetic structure and thereby conserve the gene pool. The team studied numerous Himalayan wolves and samples of the grey wolf. Thereafter, they conducted comparative genomic analysis of species worldwide.

As per their findings, Indian wolves represent a relic ancestral lineage of wolf that evolved in isolation for a very long time from the evolutionary pedigree that is represented by wolves found outside India. Consequently, the dna structure of the Himalayan and grey wolf populations is totally different from that of all other wolf species. The researchers assert that the genetic differentiation is reason enough for the Indian populations to be declared as a new species.