As good as a painkiller 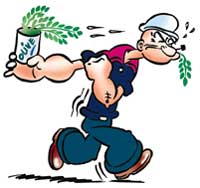 Researchers led by Paul Breslin of the Monell Chemical Senses Center in Philadelphia (Pennsylvania, USA) found 50 grammes or 4 tablespoons of good quality olive oil was equivalent to 10 per cent of the adult dose of ibuprofen. Though the amount was not enough to cure headaches, regular use of olive oil may give some of the long-term benefits of repeated ibuprofen use, including reduced risk of developing some cancers, platelet aggregation in blood and Alzheimer's disease (in mice).

The beneficial compound in the oil is called oleocanthal, which acts in the same way as ibuprofen in stifling the activity of cyclooxygenase enzymes involved in inflammation. "The compound should be present in any extra-virgin oil, though concentrations of compound will depend on a range of factors, such as the variety of olive, and the age of the olives at pressing," says Breslin. Researchers found that newly pressed extra-virgin olive oil and ibuprofen both produce a strong stinging sensation in the throat, an indicator of a "shared pharmacological activity". The researchers carried out a study on different premium olive oils and found a strong positive link between levels of oleocanthal and irritation intensity in throat. Similar results were achieved in tests of a synthetic oleocanthal (mixed with non-irritating corn oil), confirming oleocanthal to be the principal irritating compound in olive oil.