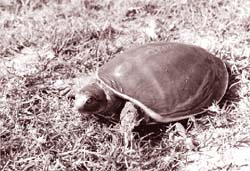 the killing of endangered Olive Ridley turtles continues unabated on the Orissa coast. According to field observers, almost 659 turtles have died on the coastal stretch at Gahirmatha during the last three months. In 1999, at least 20,000 turtles had died while swimming ashore. The number is likely to rise in the coming two months, if the government fails to take action against mechanised trawlers which continue to use nets without any turtle excluder devices, despite a ruling of the Orissa high court. Many a times, the turtles get caught and strangled in these nets and sometimes they are deliberately killed by fishermen to save their nets from getting damaged.

Every year, thousands of Olive Ridley sea turtles migrate to Orissa coastline for mass nesting. The Gahirmatha beach is the world's largest nesting ground for the turtles and has been declared as a marine sanctuary by the government in order to protect the turtles. But the fisheries department instead of protecting the turtles, has indiscriminately issued licenses to shipping companies who constantly violate the court's ruling. In March this year, as many as 67 countries passed a resolution urging the Indian government to initiate immediate steps to halt the killing of the turtles.