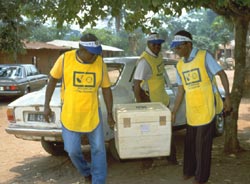 africa's Ivory Coast might become the eighth polio-free country to be re-infected with the virus, warned the World Health Organization (who). The fresh case of paralytic poliomyelitis reported here is suspected to be linked to the same virus that spread to seven polio-free countries from northern Nigeria. Prior to this, there had been no incidence of polio in Ivory Coast since 2000.

The type 1 polio virus is believed to have spread to Benin, Burkina Faso, Cameroon, Central African Republic, Chad, Ghana and Togo after Muslim clerics forced the suspension of the anti-polio drive in Nigeria's Kano state in August 2003. They claimed that polio vaccines contained the hormone estradiol, which causes infertility. This was part of a us plan to decrease the population of Muslims, they alleged.

But un agencies maintain that the vaccines are safe even if they contain trace amounts of the hormone. Nigerian President Olusegun Obasanjo's also announced recently that a report prepared by experts and Muslim leaders had "categorically attested" the safety of the vaccine. Yet the stalemate in Kano continues. Media reports quoted Kano governor Ibrahim Shekarau as saying: "When it's (the report) with us, we will subject it to our own analysis."

However, the immunisation drive in Kano might resume through an alternative means. The Kano Governor's spokesperson, Sule Ya'u Sule, recently said the state has already ordered polio vaccines developed by Muslim countries in Asia and expected the first batch to arrive soon. These would also be subjected to safety tests, he added.