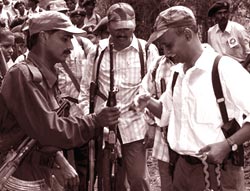 as talks between Naxalites and the Andhra Pradesh (ap) government focus on land reform, a roadblock is imminent. It is the Forest Conservation Act (fca) that prohibits settlements and even restricts collection of non-timber forest produce. This triggers local discontent that the armed Naxalite groups exploit to spread their influence.

Naxalite-affected states are vehemently demanding amendments to fca, which they say is a major reason for failure to curb the spread of these armed groups. Even the chairperson of the ruling United Progressive Alliance (upa), Sonia Gandhi, has attributed wider Naxalite influence partly to fca.

It is for the first time in 35 years that Naxalites are holding direct talks with the government. The talks began on October 15 in Hyderabad. But the previous day, the two major Naxal groups -- the Maoist Communist Centre and the People's War Group (pwg), an affiliate of the Communist Party of India (Marxist-Leninist) -- merged to form the Communist Party of India (Maoist), or cpi (Maoist). The new outfit is the country's largest armed group with 18,000 cadres spread over as many as 150 districts in 12 states, controlling about 15 per cent of India's forest area.

The talks were preceded by five months of hectic negotiations. cpi (Maoist) put land reform, including settlement of people's rights in forest area, and access to forest produce at the top of its 11-point agenda. "These two issues are central to our struggle," says Ramakrishna, state secretary of cpi (Maoist). "The drive to evict tribal settlers from forests is the most contentious issue now and we want it to stop immediately," adds Vara Vara Rao, an emissary of cpi (Maoist).

All states accept land reform as a policy priority. But they stress land reform is closely linked with forestland and fca is a major hurdle to land distribution. ap , Chattisgarh, Orissa and Maharashtra have agreed to fresh land reform but want fca amended. "Our concern is that many of the landless people are inside forests and for them reform means regularising forestland," says ap home minister K Jana Reddy. Prior to the dialogue, ap decided to form a commission to assess land to be distributed.

Orissa, the second state that will initiate a direct dialogue with cpi (Maoist), also pleads helplessness in taking up land reform. More than 5,000 tribal families live in about 4,730 ha of forestland but the state cannot transfer ownership of land to these people because fca prohibits it. "Land reform involves forestland in a major way. So the need to amend fca," says chief minister Naveen Patnaik, who wrote to prime minister Manmohan Singh demanding the Union government take initiative on the issue. The letter, dated September 25, included a request to amend fca.

It is not only the states that are upset with fca, but even Sonia Gandhi. While campaigning for Maharashtra assembly elections in Gadchiroli, a district under Naxalite control, on October 4, she said, "Gadchiroli has 70 per cent forest cover. The lack of development in this area is primarily due to the Act. "

Is a change in fca in the offing? At a meeting between Union home minister Shivraj Patil and chief ministers of Orissa, ap and Jharkhand on September 21, a consensus was reached that the Centre would take steps to amend fca so that tribals could build houses and harvest and trade forest produce from protected areas. It was also agreed to speed up forest rights settlement. Subsequently, the home ministry asked the states to send specific points on amending fca to be taken up with the Union ministry of environment and forests (font class='UCASE'>m o ef). However, home ministry sources say, such proposals are yet to be listed for dispatch to m o ef.

It seems that forest issues will become a major platform for the Naxalite groups to step into new areas. They are already making inroads into Karnataka, taking up the issue of eviction of tribals from the Kudremukh National Park.

It is more than two years that state governments first demanded amendments in fca. If the Union government is really serious about curbing Naxalite influence, it would need to take a fresh look at fca.