What powers an insect's flight? 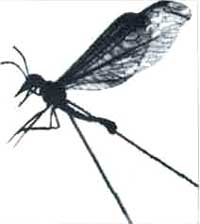 FLYING insects have elastic mechanisms in their wings, which both store and release energy in an attempt to reduce the immense effort required for flight, according to Michael H Dickinson, assistant professor of organismal biology and anatomy at the University of Chicago.

Dickinson has designed a sophisticated tabletop flight simulator to confirm that in flying insects, the energy released after one stroke is reused to propel the next stroke. Fruit flies can recapture about 10 per cent of the energy utilised in flapping its wings while larger insects are believed to recover more than 50 percent.

Flying insects flap their wings up to 1,000 times a second and most of the energy is disseminated as heat from the muscles that are used for flapping. It is believed that flying utilises more energy than any other form of locomotion. Researcher John Lighton of the University of Utah has reported that flying consumes 100 times more energy than an insect at rest. These figures are astounding when one considers that a traine human athlete running a 100 yard race uses about 15 times the energy utilised by a person standing still. Researchers believe that excessive amounts of mechanical energy are converted into power which is used to overcome the drag (longitudinal retarding force) effect of the air on the wings, to accelerate and decelerate the wings while moving up and down to generate lift.

The special energy shifting mechanism in insects amears to be the wing hinge- a complexof crisscrossing ligaments (band of fibrous tissues binding bones together) made up of a protein 'resilin'. The exact functioning of the wing hinge, believed to be the most complicated joint in the world, is still unknown.