On glue and gluon

Quantum Chromodynamics (QCI) ) is a difficult theory to calculate. The first reported discovery in this field of a particle bya computer arouses fresh interest in the study of strong interactions 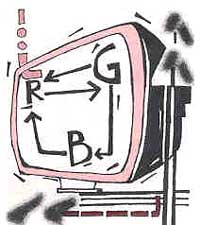 For one, though electric; charges are of two varieties, positive and negative, QCD charges, called colours, are of three varieties, usually red, bll:le and green. This colour is the source of the powerful forces which bind the quarks together to form familiar nuclear particles like the proton and neutron.

Another important difference between QCD arid QED is in the nature of the force carriers. In electromagne- tism, the force is carried by the photon which doet not have any charge. In QCD, the force carriers are called gl~ons; gluons are of eight varieties and carry colour. This aspect of QCD makes it extremely rich in structure and is responsible for many: of its novel predic- tions. Since the gluons are ch~rged, they can form particles with quarks and other gluons.

The theory also predicts the exis- tence of glueballs, which are.particles of pure glue. These rich struc,tures are natural consequences of the colour forces. There have been several reports I of their identification in experiments, though none of these have been con- firmed. But now, the IBM Research Center, Yorktown Heights, us, has reported the first observation of glueballs. J Sexton and his colleagues have reported seeing a glueballin their computer simulations (Physical Review Letters, Vo175, No 25).

'QCD, though conceptually simple and elegant, is a difficult theory to cal- culate. Theref~re, theorists use extensive computations on powerful computers and a method called lattice QCD to investigate thebehaviour of the theory. Sexton and hiscolleagu~s have reported the predictions of the mass and other properties of a .kind of glueball called the scalar glueball.

This is a remarkable " achievement, sinceanalyti- cal results in QCD are hard to come byand lattice calcula- tions have not been reliable until now. With this resl:llt, which has been hailed as the first instance of a particle's discovery b,ya computer, a new milestone has been covered in, the study of strong interactions.