On the banned wagon 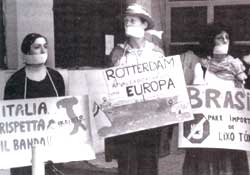 At a more international level, however, for the amendment to the Basel Convention to come into force, three-fourths of the parties (approximately 65 states) who have adopted it, must ratify it. Today, a year and a half later, Finland is the sole country to have done so. "We thought it was important that we had our legislation in place for it to be fully effective, since on our own, with 15 states, we cannot make the amendment enter into force anyway, says Yvon Slingenberg, of the Waste Management Policy Division of the European Commission.

Currently, the most widely used form of waste disposal in the EU is incineration and where the member states still have the space, it is landfills. Metals and heavy metals are recycled to a larger extent and there is also a growing emphasis on recovery, normally limited to non-hazardous waste. As far as incineration is concerned the standards are high and regulated in keeping with an EU directive on the incineration of hazardous waste. As for landfills, there is no community legislation at present.

What does this regulation bode for the developing world like India, where the recycling industry constitutes a large and lucrative sector? There is still one loophole that can be exploited - Article 11 of the Basel Convention which allows "Parties to enter into bilateral, multilateral or regional agreements or arrangements regarding transboundary movement of hazardous wastes or other wastes with other Parties or non-Parties provided that such agreements or arrangements do not derogate from the environmentally sound management of hazardous wastes and other wastes." Is the possibility of having bilateral agreements with the EU as an exception to the export ban, a viable one in the face of this legislation? "In community legislation, we do not foresee this possibility at all," states Slingenberg. "How other Parties interpret this is up to them, but this is our interpretation," she concludes.