On the right track

Bacteria to battle waste on trains 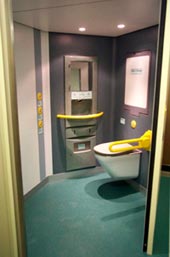 if you don't wince at the prospect of using a toilet that boasts of a macerator, a bioreactor and an ultraviolet steriliser, not to mention washing hands with recycled wastewater, then read on. Engineers from QinetiQ, the commercial arm of the uk's defence research agency, have come up with the Intratech Processing System (iwps) -- a cheap, clean and ecofriendly train toilet.

Toilets of trains built before 1980 use the 'direct discharge technology'. The waste is directly emptied on the tracks. This is now frowned upon, says Julian Hiles, a rail engineer from Porterbrook company based in Derby, the uk. "Speeding trains are bad enough for track workers, without having to avoid other things."

The new toilets use microbes normally found in waste treatment plants. "Largely, the technique is about manipulating bacteria to do what you want," says iwps project leader Geoff Smith.

The macerator chews up solid waste and feeds it into the bioreactor. This aerated tank contains membranes coated with the bacteria. The bugs break down the solids into carbon dioxide and water. The gas is pumped off and bacteria-free water passes across the membrane. Some of the water is sterilised with ultraviolet light and returned to the flushing tank. The rest goes through a reverse-osmosis device that filters out the remaining chemicals, such as proteins and urea, so that the water can be used for washing hands.

"But this is the tricky bit," admits Smith. Although the water is free from microbes, there are as yet no rules on safe levels for some of the other substances present in the filtered water. Smith and his colleagues must wait for a European Union ruling on these before they can launch the device.

Meanwhile they plan to use the toilet on a trial basis to see how it stands up to the rigours of daily use. Because all the water in its system is reused, there is no waste which needs to be treated. This makes the system more ecofriendly, says Smith. It also rewards toilet users with the luxury of a six-litre flush -- the same as in an average home. Moreover, the system needs servicing only after every 30 days, that too to remove sludge from the bioreactor.

If used in houses, the high-tech lavatory could considerably minimise the use of clean water for flushing, the engineers claim.