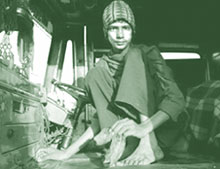 For those of us who live in cities, trucks have nuisance value. Either they clog city traffic at night or are hazards to watch out for on the occasional driving trip. Few of us think about the drivers or their lives.

Well, someone's just forced us to do that. Jason Taylor put in three months on the road, hitting all the major highways in India, on over 30 trucks. His photographs are flavoured with diesel, dhaba food and the dust that comes with life on the national highways (nh). As he puts it, "I wanted to show them in their environment, on the road. They're people, with lives and families. But there's so much negativity associated with them."

The negativity Taylor is talking about comes from truckers being on the list of high-risk groups in the context of hiv / aids. The idea here is not to deny that drivers are at risk, but to support them in the campaign for safer sex and against the stigma that often comes as a by-product. Taylor is candid. "Everyone drinks. Businessmen cheat on their wives when they travel. Why stigmatise this segment alone?" Some of these pictures, showing the drivers with sexual partners, are also pointers to the other group that has suffered hiv discrimination, the sex workers.

Many of the photographs are about the intervention sessions with truck drivers, including the condom education routine. But the real pull of the show is seeing the drivers and their young helpers getting on with their lives, behind the wheel or at the next stopover. In other words, driving for days on end, eating at odd stops, bad roads et al. It was always a harsh life for India's 5 million trucker drivers and helpers, the hard working, badly paid people who keep our lifelines going. But the discrimination has hit them hard. Even getting married is tough now. They are uptight about the spotlight. Yes, they know they're taking chances. But its par for the course when a wrong turn or a sudden crash is a more likely route to an early death.

The documentation is part of an ongoing project of hiv -preventive intervention. The extensive operation, which is being implemented along major national highways, at 40 halt points, aims to touch around 20,000 to 30,000 truckers per point in a year. Taylor's carefully put together show, which comes with an installation of 320 images, was made possible through a collaboration between Sexual Health Resource Centre, New Delhi, the Transport Corporation of India, the non-governmental organisation Seher and British Council, New Delhi.