On the verge of a breakthrought

The electronics industry is poised for a quantum jump as a group of Indian scientists claim to have developed a silicon-based, light-emitting diode. 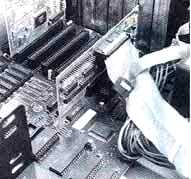 THE NEXT electronics revolution may be round the corner. A group of scientists at the Delhi-based Solid State Physics Laboratory (SPL) claims to have produced a diode made of silicon, which will make tomorrow's supercomputers smaller and faster.

"I think we are the first in the world to make a porous silicon device that emits light for a sustained period, when current is passed through it," says an excited V K Jain, who is the leader of the group.

Making light-emitting diodes (LEDs) -- devices that convert electricity into light -- from silicon has long been the Holy Grail of the electronics industry because they are much faster, can carry more information, and do not interfere with one another as do electric currents.


Presently, LEDs are the preserve of a more complex and expensive semiconductor, gallium arsenide. However, as silicon is the dominant raw material of the modern electronics industry, making LEDs from silicon has fantastic possibilities.

The SPL device ensures that more electronic elements can be packed into spaces by eliminating the tangle of electrical wires that connect the elements.

Semiconductors such as gallium arsenide and silicon have an energy gap, called the "band-gap", between the valence band -- the energy levels where electrons normally reside -- and the higher-energy conduction band -- in which electrons are free to move.

While researchers have successfully made silicon glow when excited by X-ray and ultraviolet light, they have had very little success in making silicon glow in response to electric current. What little glow they achieved faded away almost instantly.

It is this property that the SPL scientists have harnessed from silicon. "We took silicon and doped it with phosphorus. On passing current through it we found, to our surprise and joy, the silicon wafer glowed orange-red. And it continued to emit this light for five hours," says Amita Gupta, a member of the group.

But for practical applications, say the scientists, the glow would have to be bright and capable of being switched off and on approximately a billion times per second. "I think our device is capable of this performance, although we couldn't measure it," says Jain. He cautioned, nevertheless, that it would be some time before their discovery could be commercially exploited.

Jain believes their finding will lead to a better understanding of why silicon glows -- one of the most debated topics in the last two years.