On the wild side 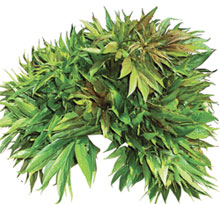 Many people in the Garhwal region of Uttarakhand, particularly in remote valleys, depend on a variety of wild plants for food. While some pick them from forests and alpine meadows, others cultivate them in kitchen gardens. One such leafy plant favourite among the residents is puyanu or Himalayan Peony (Paeonia emodi).

Endemic to the Indian Himalayan region, puyanu grows in alpine pastures and moist areas of forests. This perennial herb with its white flowers grows luxuriously under the canopy of walnut, maple and chestnut. Women collect its leaves and tender shoots while fetching fuelwood and fodder. February-April is the best season to collect puyanu; leaves are not collected once flowering starts. The leaves and shoots of puyanu make for a healthy vegetable but taste bitter. “Bitter taste accounts for most of the medicinal property of the plant,” says Surma Butola of Suraithota village in Niti valley where puyanu is called chandra. In Kedarnath valley, people sell pickle prepared from puyanu or dhandru (local name) twigs during the religious Kedarnath yatra season from May to October. “Tourists really like the taste and buy bottles for their homes,” says a resident. The puyanu proves to be a saviour during winters when snowfall disrupts daily life. Its leaves are chopped, boiled, sundried and stored in the form of leaf cakes, locally called suksu, for those chilling days. In some villages of Garhwal, people enjoy dried fermented suksu vegeatble with hot finger millet chapattis, fried red chillies and dollops of butter.

The list of medicinal benefits of puyanu does not end here. According to Wealth of India, a publication on India’s plant resources by the Council of Scientific and Industrial Research, the rhizomes of puyanu are used as a tonic to cure backbone ache, dropsy, epilepsy, eye disease, vomiting, while its seeds are purgative.

Locally, extract of fresh puyanu leaves and shoots is given to children suffering from stomach ache. “Every household has a bottle filled with the extract of puyanu leaves and shoots,” says Asha Semwal of Shersi village in Kedarnath valley. People use roots of the plant for curing headache, dizziness, vomiting and uterine disease. An infusion of dried flowers of puyanu is considered useful for curing diarrhoea.