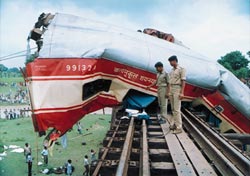 the Howrah-New Delhi Rajdhani Express's recent accident which claimed 120 lives, has thrown up the oft-repeated poser: is the Indian railways really serious about the safety of trains? A look at the present scenario suggests that this is not the case.

In the past, though railway budgets have mentioned the word 'safety', there has never been a comprehensive policy on this issue. And till recently, neither was a separate fund allocated for it. Even the money assigned for technological upgradation and track maintenance has largely been unused. In 2000, the Union ministry of railways estimated that around 6,000 kilometres of tracks needed replacement. There was talk of earmarking money for this project but the plan was confined to the files.

Every year the ministry announces new rail routes, but technological aspects are almost always forgotten. Officials mention that the most important component of upgradation is automatic signalling -- a fully automatic system, which does not allow two trains to be on the same track at one time. But currently hardly one-fourth of the track length has automatic signalling. Last year, a special railway safety fund of Rs 17,000 crore was set up for replacement of old systems over the next six years. The safety works to be executed through this fund include renewal of nearly 17000 kilometres of track, rebuilding of over 3000 bridges and replacement of signalling gears at almost 950 stations.

But is this enough to make the railways safe? "No", says O P Jain, former director general of Lucknow-based Research Design and Standards Organisation, under the railway ministry. "The fault lies in the whole system. The railways has always done the maintenance, replacement, upgradation and modernisation works in a piecemeal manner," adds Jain. In other words, while tracks are changed on one line , coaches are improved on another and signals automated on yet another. This uncoordinated approach means that no particular route is made safe. "Unfortunately, we do not upgrade the entire system," says Arvind Gemini, director, Kalindi Rail Nirman (Engineers) Limited, a New Delhi-based private body of engineers.

While, the Railway Board under the railway ministry is the safety controlling authority, the Commission of Railway Safety directs, advises and cautions the railway executives on safety issues in train operation. But as a ministry official sums up, "Advice needs to be heeded and this is where the problem lies."