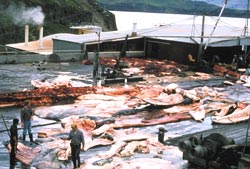 if iceland made a dramatic re-entry into the International Whaling Commission (iwc), the sequel to the event promises to be equally startling. For, after having voted in favour of Iceland despite its plans to resume commercial hunting of whales, Sweden has done a volte-face terming the move an "unfortunate mistake". Swedish authorities now say that the country is still opposed to whaling and would try to rescind the decision.

Iceland was accepted into the commission at a recent iwc meeting held at Cambridge in the uk. The vote, which determined the country's fate was very close. Of the commission's 50 members, 19 voted in favour and 18 against. The other members were either absent or ineligible. While the uk and the us were opposed to Iceland's membership, the countries that voted for it included Norway, Switzerland, Sweden, Finland and Denmark.

The worldwide ban on commercial whaling has been in place since 1986. Except Iceland and Norway, countries that were members of the iwc had accepted the decision then. Though Iceland stopped whaling, it left the commission in protest. Iceland has been trying to gain admission into the commission for the past 10 years. According to Arni Mathiesen, Iceland's fisheries minister, it will not resume hunting until 2006 and will catch fin and minke whales, which it claims are plentiful. The decision has also prompted harsh criticism from environmental groups.