On verge of destruction 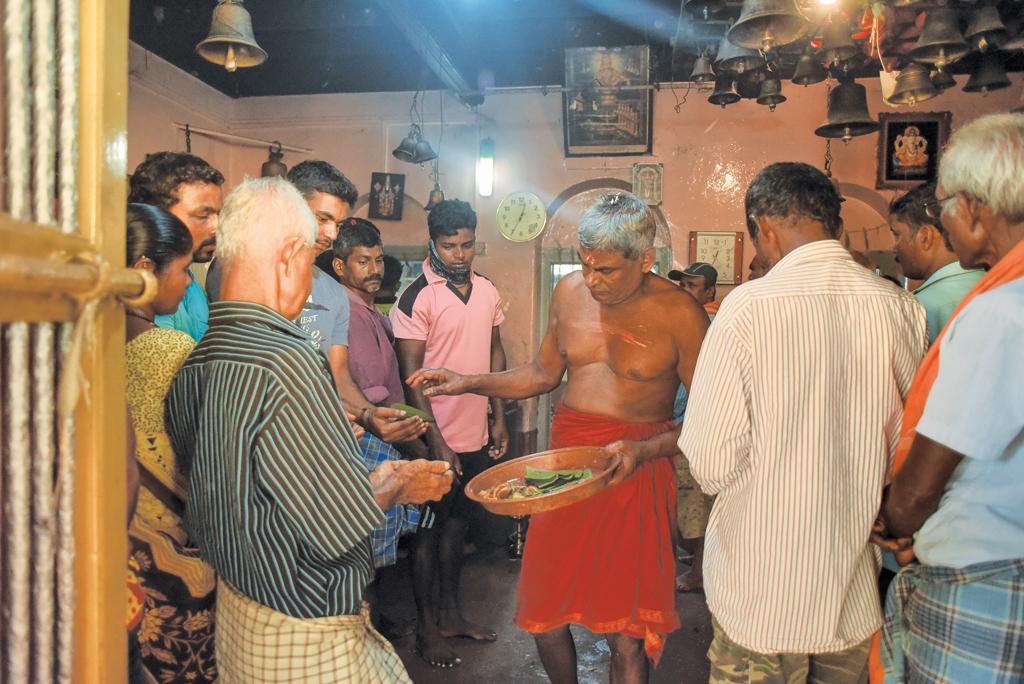 Devotees partake of prasad at Bobburulingeshwara shrine. The temple is situated on an island in the middle of the critical Aghanashini estuary where the Tadadi port is being planned

It is a special moment for Govind P Pattgaru Masur, the main priest of Bobburu-lingeshwara shrine. At 12 pm, he closes the doors of the temple’s sanctum for a minute after the morning ritual, including aarti, is over. After the doors reopen, Masur has visibly transformed. In a high-pitched voice, he starts narrating Kannada verses to a fellow priest waiting outside. The discourse between the two continues for 20 minutes.

Assembled devotees watch the priests eagerly. Bobburu-lingeshwara is situated on an island in the middle of Aghanashini estuary in Uttara Kannada’s Kumta, a coastal town. It is a heritage site. Its mangroves considered sacred support a rich biodiversity. The region is home to 130 bird species, bats as well as innumerable fish and crabs, making it one of the most biodiverse estuaries along the western coast. Most of the temple visitors belong to Masoor village in Kumta. On this occasion, they await the deity’s answer to be conveyed by the priests. Generally, Masoor residents take important decisions only after seeking divine permission.

Farmers in Masoor grow kagga paddy, a variety which can tolerate salinity. Till now machines have never been used for harvesting. But this year due to increased labour costs, cultivators want to use machines and await the divine order on whether this can be done. A long silence ensues after the priests stop talking. The crowd breaks into cheers after hearing permission has been granted. After partaking of prasad, the devotees disperse. Happy with the deity’s answer, Masoor residents are unaware about the greatest threat, which can simply obliterate their existence.

The construction of a mega port on the northern shore of Aghanashini at Tadadi will prove fatal for the residents of Masoor and other nearby villages, dominated by Pattagarus (rice growers), Meenugarus (fishermen) and Gowdas. The project was proposed in the 1970s and the environmental impact assessment (EIA) conducted in 2014. The Karnataka Industrial Area Development Board has allocated over 573 hectares (ha) for the port. But according to experts, it is a disaster waiting to happen. “The port would lead to considerable environmental damage to the estuarine ecosystem,” M D Subash Chandran, professor at the Centre for Ecological Sciences, Indian Institute of Science, Bengaluru, says. To be built under the Public Private Partnership model, the port will be used to export iron ore and steel products and import coal, cargo and containers. At present, it is awaiting the Karnataka forest department’s clearance.

Back in 2014, the Karnataka State Industrial and Infrastructure Development Corporation roped in the Nagpur-based National Environment Engineering Research Institute (NEERI) to conduct the EIA. The draft version of the EIA was recommended by an Expert Appraisal Committee of the Union environment ministry. Next year, a revised version of the EIA incorporating slight modifications was also cleared. However, Chandran, finds “serious flaws and distortion of facts” in the revised EIA. In a letter issued to the director general of the Council of Scientific and Industrial Research, he points out how “an institute of the stature of NEERI could exhibit such a degree of ignorance not only on estuarine ecology, but also on land ecology and bio-diversity of the region”. A copy of the letter is in possession of Down To Earth.

The construction of the port will affect the region’s fishing industry on which locals depend. Those belonging to the Meenugaru caste are ignorant about the project’s impacts. Many are labouring under misconception. For instance Prakash, who works as a contractor in Kumta, says that “the port has been shifted elsewhere owing to protests by locals”. The truth is Aghanashini’s mangroves, marsh vegetation and mudflats are sources of a diverse variety of fish, 30 species of crabs and bivalves. The dense mangrove vegetation is responsible for fish breeding and multiplication of mudcrabs, which sustain local residents and attract tourists, Chandran adds.

According to Shivakumar Haragi, professor at the Post Graduate Centre of the Department of Studies in Marine Biology in Karwar, Uttara Kannada, around 3,000 people depend on edible bivalve collection from January to May. Haragi says eight species, including shell fish and oysters available in the region, are a source of sustenance for locals. An individual earns around R1,500 on an average per day. On any given day, some 250 people are engaged in bivalve collection in marshy areas of the coast. The number rises to 300 during the south-west monsoon. The port will render the region’s traditional fisherfolk jobless and they will have to work as daily labourers. Though there has been a ludicrous proposal to relocate the marshes and mudflats, Chandran says it is not a feasible proposition. Recreating artificial mudflats to culture oysters is not possible as the current habitat has evolved over millions of years and cannot be recreated.

The expert adds that no port should come up as Kumta has been declared an area of “critical erosion” by the environment ministry. “Port structures cannot be built within a five-kilometre stretch on either side of such locations. The EIA has skipped this vital piece of information,” Chandran says. Also, environment ministry rules say in erosion-prone areas, EIA has to be carried out over a period of three seasons. But in the case of Tadadi port project, the studies were limited to only one season.

Serious irregularities have cropped up in data collection when the EIA was conducted. The report calculates the total area of the estuary to be 18,000 ha while Chandran and his team has put the number at 4,796 ha. The allocated area of 573 ha meant for the port would be around 1/36th of the reported area, and this may have cleared the project. According to Chandran, “All the estuaries of Karnataka together barely reach the figure of 18,000 ha.”

The estuary is home to over 120 species of birds, out of which many are migratory birds. But the EIA quotes the number to be only 55. Many tree and plant species have also been misreported. Hoppea integrifolia, one of the trees reported, does not even exist.

Reported tree species like Dhaora (Anogeissus latifolia) and Ceylon Satinwood (Chloroxylon swietenia) are not found here. The marine biodiversity has been totally ignored. There are loopholes galore in the reportage of mangrove species too. This was brought out in a separate report titled Assessment of Present Environmental Quality Status of Tadadi Port Region in 2016. The EIA team reported 10 species of mangroves out of 13 found in the region. Of these, white mangrove (Lagunacularia racemosa) found in America and the west coast of Africa was reported to be found here. Similarly, red mangrove (Rhizophora mangle) was reported in Tadadi, but is actually found on the American and East African coasts.

With such loopholes, Chandran says “it is highly unlikely that the EIA team even visited the region”. According to experts, the area chosen for data collection was limited to 0.14 ha, which does not reflect the true biodiversity of the region. The mandated collection of data within a 10-km radius was also ignored, thus excluding the Western Ghats close to the estuary.

Chandran hints at a possible connivance between the port development authority and the EIA team to undermine the significance of Aghanashini. Even Prime Minister Narendra Modi has been apprised about the sensitive issue. If the port comes up, it will destroy a 120 million-year-old ecosystem, a biodiversity heritage site declared by the Karnataka Biodiversity Board. Mails sent to the environment ministry and other authorities went unanswered at the time of filing the story.