Better customer service, more convenience for the salesperson and on-the-spot deals are now possible with the help of palmtop computers 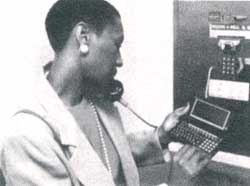 A GROWING number of companies throughout the world are exploiting the power of laptop and palmtop - small handhelds that include a keyboard - computers. These systems are being used to speed up information flow to distant sites, feed field employees with the collective. intelligence of the organisation, and set up virtual offices to cut real estate costs and also provide efficient customer service.

Thanks to the latest developments in laptop technology, the 20-member sales force of an American movie and television show producing company Metro - Goldwyn- Mayer (MGM), for instance, can now show full motion video clips of its latest productions to its clients at broadcast outlets worldwide. But this is just the tip of the iceberg. "The clips can get executives excited about the shows, but the sales force must sell the shows as quickly and profitably as possible," says Carol Campbell, director of strategic systems at MGM in Santa Monica, California, us. "That's where the real value of laptops comes in."

To speed up sales, the 755 CD ThinkPads from the IBM Pc Company. are equipped with Powersoft's WATCom SQL database - which contains information on show background, availability, rights, market blackouts and all those parameters that help define a contract. This system also provides detailed information on the clients, contracts, fees paid and products sold by the market. As a result, the salesperson can execute the deal on the spot. "The salesperson no longer has to call across several time zones for instructions. This empowerment not only shortens the sales cycle substantially, it also provides our customers with a much better service," asserts Campbell.

The MGM is just one of the many companies leveraging the power of the laptop. "Portable computers are essential if you want to be competitive in an information - oriented world," writes Nick Wreden of the us-based Aspen Communications in the journal Beyond Computing. "Now the displays, processor speeds, and storage capabilities of portable computers have advanced to such a point that they can now be used as a primary computing device."

One of the most powerful laptop applications is in sales force automation (SFA), which enables widely dispersed salespersons to track blown customers, prospects and product information while communicating with headquarters. "While many of the SFA efforts relied on backoffice cost reductions , to offset implementation costs, the true value is in enhancing the sales process," says Richard McWhorter, director of applied technology at the Atlanta-based BellSouth Advertising and Publishing. "By introducing powerful laptops in the sales process, we are able to reduce paper intensive work and open a whole new area of interactive multimedia presentations," McWhorter adds.

Random House, a New York-based publishing company, has equipped its trade press salespeople with Toshiba 4600 laptops, its merchandise and mass market sales force with IBM ThinkPad 750c systems, and its international sales team with Panasonic v41 units - all of which are fitted with high speed modems for connection to a Lotus notes server. "In addition to increasing sales, portable computers can help an enterprise realise its substantial productivity advances, 11 says an official with Random House.