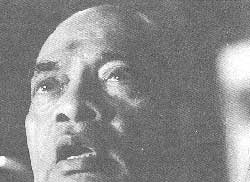 AT THEIR most convivial, Indian NGOs tend to keep a wide no-person's-land between themselves and the government. So when Prime Minister P V Narasimha Rao called for voluntary organisations to cooperate with the government in order to eradicate poverty, they considered the possibility with lips pursed in doubt. They made their trepidation clear at the two-day NGO-government meeting, organised by the Planning Commission on March 7 and 8 at the PM's behest.

The meeting was also attended by Union minister for human resources Arjun Singh, Union minister for health and family welfare Sitaram Kesari, and minister of state for health B Shankaranand. Rao stressed the need for the government and NGOs "to understand one another so as to arrive at workable methods of cooperating closely at the grassroots level and perhaps all other levels". The Deputy Chairman of the Planning Commission, Pranab Mukherjee, emphasised the need to prepare a network of NGOs to supplement the work of the government. But NGO representatives, hackles raised, iterated as they have often done before that the government should keep its hands off the Third Sector.

Rao replied that in 1991 he had offered NGOs free rein to develop any administrative system of their choice, but had received no response. He requested them to keep the people informed of government programmes and stressed the need for a meaningful dialogue between the government and the NGOs to ensure feedback. "The role of NGOs is both as agents of delivery and agents of change," Rao said.

He, nevertheless, warned that with the 73rd amendment and the empowerment of panchayats, conflicts could arise between them and NGOs. He advised NGOs to develop an appropriate interface with the panchayats and not appear as "meddlers".

It was agreed upon that every ministry would set aside a part of its annual budget for NGOs and involve them in the planning process. Mukherjee added that a single-window clearance for all NGO projects was being set up.

Participants at the meeting observed that many NGOs were being formed to avail of grants from ministries. "This trend is going to increase," says Anil Singh of the Voluntary Action Network of India. Participants also decided that NGOs will mobilise the poor by educating them and implementing rural development programmes, with the assistance of the government or government-approved external agencies.

But the meeting, says Singh, was unsatisfactory. Lalit Pande of the Uttarakhand Seva Nidhi of Almora, Uttar Pradesh, says that by asking NGOs to help in poverty alleviation the government has admitted its failure in delivering its promises to the poor.

He flayed the concept of the government, the panchayat and NGOs working together. "Already, politicians are unhappy with the autonomy of the panchayats. If NGOs are to work in the scenario proposed, it will get worse," he said. Pande was also critical of the role of "contractors" that the government visualises for NGOs. "What does the government mean by NGOs 'preparing the people for its programmes'? We don't want to be the government's spokespersons," he said.

P R Mishra of the Chakriya Vikas Pranali of Palamau, Bihar, who has undertaken pioneering environmental regeneration work, felt that the meeting did not achieve much. "It ended in a farce," he said. "There are lots of seminars like this which make no impact."