One hundred years of denial 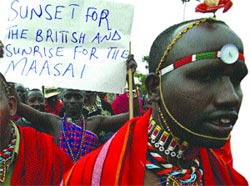 There are some wounds that time cannot heal. Hundred years after being driven from their land by British colonialists, Masai tribes in Kenya's Laikipia district are still demanding the return of their ancestral territory. Their campaign pits them against a handful of white farmers whose families have created vast ranches on the land after the expulsion of the tribes. "The Masai were conned into signing these treaties," says Simon ole Kaparo, a local ngo official and one of the young Masais leading the campaign. "We have an obligation to correct this wrong." Matters came to a head when police shot and killed a 70-year-old man and wounded four other Masai grazing cattle on private land they said was theirs. The Kenya government, which inherited the Anglo-Masai treaties after independence, says the land claim is a Masai myth. Lands and housing minister Amos Kimunya said that the government did not recognise the agreement struck between a Masai Laibon (medicine man) and the British government. Kimunya said the government would decide on the expired leases, taking into account recommendations received during the land reform process.