One river dried, Agartala eyes another 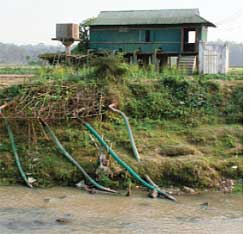 Tripura capital plans to get water from 70 km

THE Tripura government plans to transport water to Agartala from the Gumati river, which is 70-km away, through a water conduit. This is to meet the water shortage faced by about 500,000 people in Agartala. But the project has run into controversy.

Sumes Chandra Das, chief engineer, Drinking Water and Sanitation, Tripura, said the everyday water requirement of Agartala is about 53 million litres. The Howrah supplies about 25 million litres per day. "The rest is met through groundwater, which too has depleted substantially. Contamination has also been detected in the Howrah," said Das.

R C Reddy, hydrologist with the Central Ground Water Board, said the annual flow of the Howrah has been the same for the past 50 years--36,032 m3. The problem of the river is silt and inadequate storage structures, he added.

In 2004, the Tripura State Pollution Control Board (tspcb) had conducted a study and observed that more than 1,000 toilets along the Howrah discharged human excreta into the river. The bacterial contamination (coliform) ranged up to 1,800 most probable number per 100 ml, against the standard limit of 500.

Animesh Debbarma, former mla and environment activist, said this problem should have been fixed by strengthening treatment plants instead of building up a case to transport water from Gumati river.

The pollution control board's chairperson Mihir Deb said pollution of river water is a serious concern. "The average flow of the river Howrah might be okay but during winter it does not have enough water. Officials of the the public health engineering department acknowledged this," Deb said. He added that seven thickly populated areas of Agartala were not getting enough water since October 2008.

The National Buildings Construction Corporation is executing the project and has sought funds under the national urban renewal mission. A part of the project amount, Rs 78.22 crore, was sanctioned by the Centre on January 16, 2009.