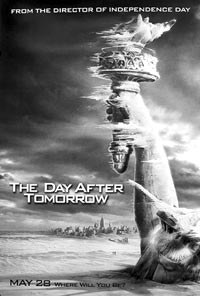 Is global warming too slow for Hollywood? The Day After Tomorrow, a film due to be released on May 28, shows rapid melting of Arctic ice, triggering massive changes in ocean currents, shutting down the Gulf Stream and creating a super storm. Tornadoes then rip through Los Angeles; a snowstorm hits New Delhi and giant waves hit New York. The reviews have been mixed.

It "is a great movie and lousy science," says a review in The Guardian, a uk-based newspaper. But Sir David King, the British government's chief scientist, has called it "a spectacular action film." Although the science is flawed, Sir David believes the film "raises the profile of a critically important public debate".

us based e-zine Grist says: "extreme weather events are escalating... but all these won't happen in one day." Guardian reports that 20th Century Fox, the movie's producers, had invited a group of scientists for a preview. "Before it began, climatologist Mike Hulme asked the audience to consider whether good science and good film-making could go together... it became obvious that the answer was no."